Achieving Net Zero – Too Cheap to Meter or too Expensive to Deliver?

National Grid updates the electricity and gas markets annually with its new Future Energy Scenarios and this year’s edition sees a significant shift as it has been adjusted to accommodate Net Zero 2050 targets within three of the four offered scenarios.

Last summer, the UK government passed new laws that require the UK to achieve net zero greenhouse gas emissions by 2050 and these scenarios offer a view on what it will take to achieve these challenging – but now legal – requirements. The standout highlights of this report are the significant changes required if we are to achieve these now legal targets.

New Initiatives and Support Will Be Required

Overall, if the paths to net zero are taken, significant upfront investment will have to be made over a sustained period and at the moment there are no signals to make this happen by the private sector, meaning that new initiatives and support will be required. As far as natural gas production and usage is concerned, the options set out are fairly simple – to move away from natural gas/oil usage almost entirely, or to use natural gas/oil within the context of carbon capture and storage.

The most significant climbs in levels of power generation set out by the system operator, National Grid, come from wind farms and solar parks, and because of the intermittency of these sources achieving net-zero requires a certain amount of over-installation. 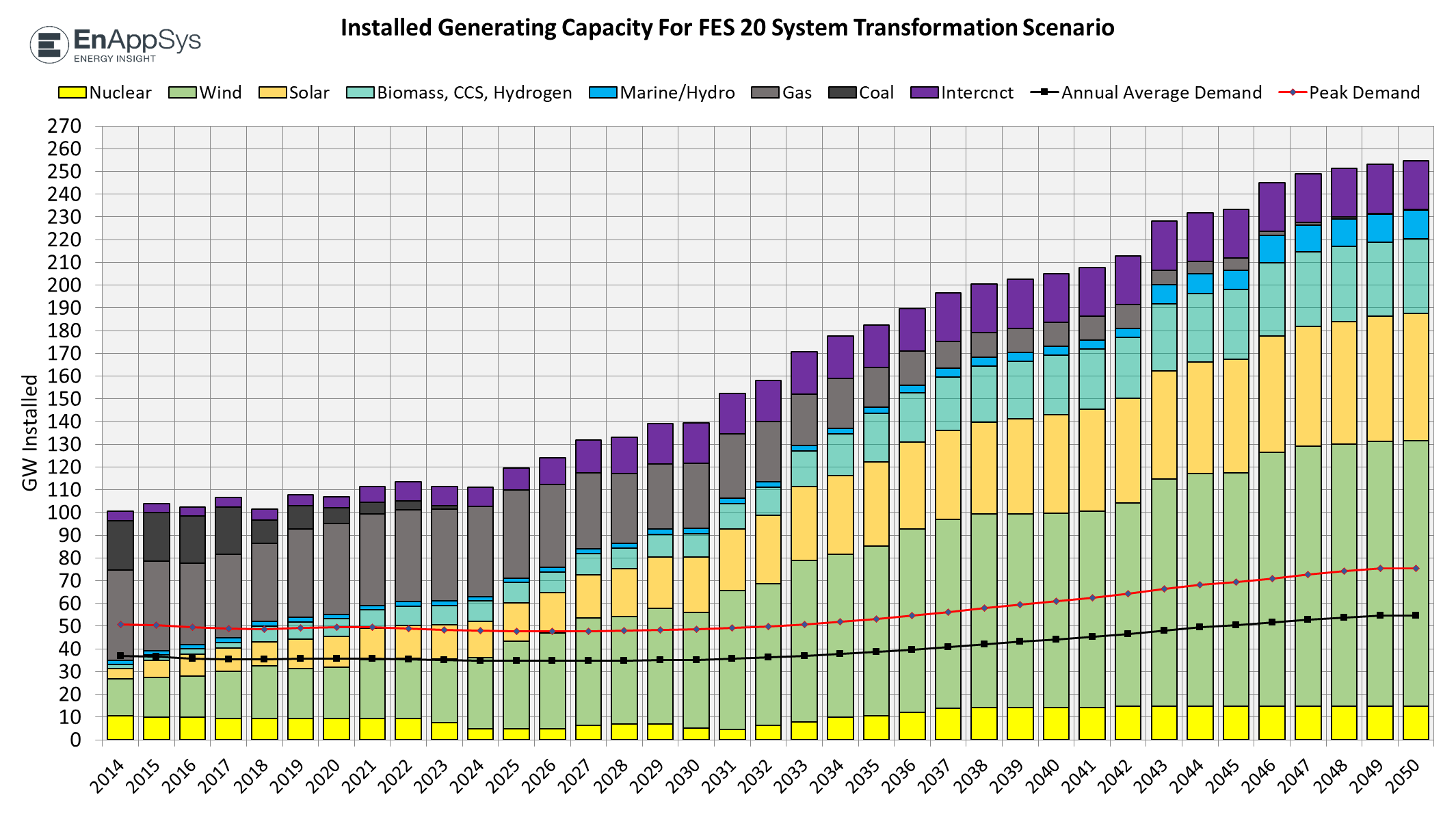 For solar, the expectation is a climb in installed capacity from 13GW to between 55GW and 75GW, and for wind farms, the capacity levels should rise from just over 20GW up to in the region of 115GW to 150GW. These represent big figures in a market that currently has a peak demand of around 60GW (forecast to increase to between 75GW and 95GW by 2050).

At an annual load factor of 33%, this wind generation translates into an average annual output of 38-50GW of production which fits within forecasted demands of the system, but levels of wind output will be expected to rise and fall over time depending on the weather at the time.

For instance, applying the increased levels of capacity to wind and solar over a 16-day period in the first half of March 2019 would result in an average production of 62-82GW depending on whether installation levels were at the low or high end of the range. Factoring for nuclear and other renewable forms of generation would take production up to an average of 80-100GW over this period.

In 2020 the market has already struggled with high levels of renewables generation – with this not helped by the impact of Covid-19. This has led to negative prices when, at times, the system has simply had too much power. Given the potential increases in renewable capacity, these sorts of challenging periods will only become more problematic.

In 2020 the market has already struggled with high levels of renewables generation. At times, the system has simply had too much power.

In a power market the size of Britain, adding a 1GW wind farm to an otherwise thermal system produces no real challenges in terms of system management and nor does the second or third GWs of additional wind capacity. However, with the goal of net zero, wind farms and solar panels will continue to be added into a market that is already saturated with pre-existing capacity, in order to reach the point where the market can be entirely met by renewables.

This is why during the peak renewable day of that 16-day period, 100-120GW of power would be able to be produced at nominal cost based upon these scenarios, during a period in which storage is already likely to be maxed out and with peak demand being well below this figure.

During these periods through the year, some of the excess will be able to be converted into hydrogen but realistically these periods carry an excess that must be dumped or used. For at least some days of the year we could finally have electricity that is too cheap to meter.

What results is a certain amount of wastage that could be used usefully or which could be ignored by the system. Wasting such a resource sounds unlikely, but it is worth bearing in mind that with the system continuing to have issues moving power from Northern Scotland down into England, the current market continues to pay wind farms to turn off rather than find productive uses for that excess power.

During these periods, power is not only free but being paid to shut off and so a saving could be made by paying people to use this power. One of the structural challenges involved in this is the lack of half-hourly metering for domestic electricity supplies, with Scottish households being charged for the electricity they use at a time when the system is paying wind farms to shut down.

Savvy users of time of use tariffs on the electricity suppliers who do offer this service can already benefit from such arrangements, but best not to use too much power on an expensive evening under those arrangements.

Despite potential low cost, free or even paid for power during periods of excess, the overall result is unlikely to be cheap.

What we will gain in terms of low and possibly negative commodity electricity prices at certain times will ultimately require higher fixed-cost charges. The investment required for the infrastructure needed for generation and storage of hydrogen, carbon capture thermal plants, longer term energy storage, large-scale renewable projects, electrification and/or decarbonisation of domestic and commercial heating will require incentives for the high initial capital build. The signals and returns cannot in our view be delivered by commodity market prices and the system operator alludes to the fact that support and incentives beyond what we have now are required to achieve net zero.

Whilst the scenarios have a high degree of electrical interconnection with neighbouring countries, the interaction of their net zero plans with GB plans could result in even more extreme periods of oversupply which needs managing.

The path set out by the scenarios has a high degree of linear progression given the assumption that change comes quickly. At the moment the growth rate of low-carbon technologies puts GB off this trajectory. The additional scenario illustrated by National Grid, taking a steadier approach to decarbonisation – Steady Progression – still emits 258Mt of CO2 in 2050, a reduction of 68% compared to the level in 1990.

The option would seem to be an excess of renewables sometimes delivering far more power than we need or the missing of the net zero targets. As far as decarbonisation is concerned, the low-hanging fruit has been picked and it gets incrementally harder from here on in.

Against the background of record spending to mitigate the effects of the pandemic, creating the incentives and drivers for the GB energy sector to deliver the investment to achieve net zero by 2050 is another expensive challenge ahead.