Britain’s interconnectivity with Europe to rise sharply despite Brexit

Installed interconnector capacity in Britain is set to rise to 10GW by 2023 and could increase further to 20GW in the next decade.

Power markets do not sit alone in isolation. Great Britain’s power market is connected to Belgium, France, Northern Ireland, the Netherlands, and the Republic of Ireland.

More recently, in 2019, an interconnector was built to join Britain with Belgium, but now as much as 16GW of interconnectors could be in operation in the next ten years – connecting Britain with new markets including Norway, Denmark, Germany and perhaps even Iceland.

This growth in levels of interconnector capacity undoubtedly creates changes in the underlying market. This is particularly so since carbon costs within Britain are higher than those on the continent. For example, a power station in the Netherlands identical to one on British shores has lower generation costs as a result of the difference in carbon charging and industry charges.

This means that British-based power stations are increasingly facing competition for volume and balancing revenue as traders move balancing power across interconnectors produced by stations in continental European markets.

In Britain, the Balancing Mechanism – the central mechanism for balancing differences that occur between supply and demand – used to be the preserve of large power stations, but now they are facing competition for short-term balancing services. These competitors include small peakers and batteries, but also for longer term balancing interconnectors are now being used. This means that power station traders need to look beyond their traditional focus of comparing themselves against their peers in their local market, to looking further abroad into markets that are affected by other dynamics and different market rules/ regimes.

How do interconnectors participate in the Balancing Market?

Great Britain is an island, and this means that as renewables grow it faces unique challenges to make sure the lights stay on.

One area of interest in Britain is the level of inertia in the market. Inertia is in effect the level of resistance to any change in frequency; with changes in frequency being caused by differences between supply and demand. Large generators have large heavy turbines that spin and provide a resistance to changes in frequency so rapid and uncontrollable drops in frequency become less likely. When there is a lack of conventional generation on the system, National Grid needs to create space for that generation to run in the system to boost inertia by either turning down renewables or increasing export of power on interconnectors. This approach provides opportunities for conventional generation stations as they will be brought on within the balancing arrangements for extended runs and, although National Grid is purchasing new inertia services, this requirement will exist for some time to come. This management of inertia has become more crucial since the growth of renewables and this renewable growth has also resulted in constraints on the system that can in some cases mean that interconnectors provide an alternative to bringing on or turning down a plant in the same part of the country.

Finally, when the market does not deliver the correct balance of power for demand, National Grid is increasingly seeking to import power for one or two hours instead of starting a conventional power station and running it for five or more hours to cover this short requirement. This will be aided by the higher cost of generating power in Britain that results from these countries’ higher carbon prices and generator industry charges.

Until now, the impact of interconnectors has been moderated by the reasonably small levels of their transfer capacity, with 4GW of capacity historically existing to and from continental Europe and 1GW to/from Northern Ireland and the Republic of Ireland.

Current interconnectors either built, in construction or at an advanced state of planning account for almost 20GW of capacity. Interconnection into the GB market will reach 10GW by 2023 – which is around 25% of average peak capacity – and this will change how the market operates for every participant. 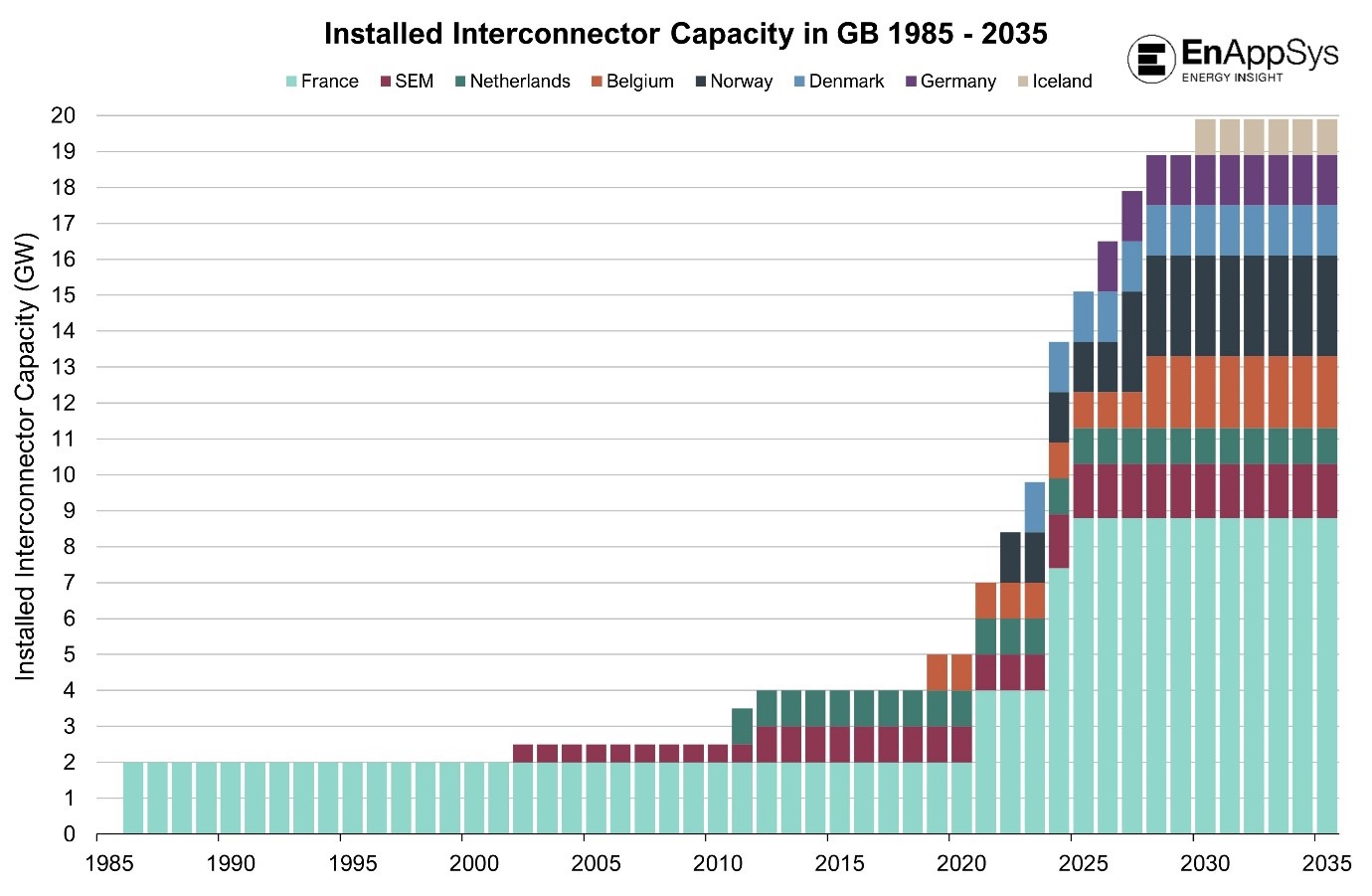 The new IFA2 interconnector to France is planning to enter commercial operation before the new year and the Eleclink interconnector through the channel tunnel in 2021. Links to Norway and Denmark will come on line in the next two to three years.

Already the market rules within Great Britain have allowed interconnectors to enter the Capacity Market – a mechanism through which contracts are awarded for providing power that offers a lifeline for many power stations – and this came at the expense of conventional plant.

However, Brexit has already put 4.8GW of the later-stage French interconnectors (FABLink, Aquind and GridLink) in a state of delay as the French regulator waits for clarity on Brexit.

For the past five years or so, the GB market has become used to the day ahead market coupling that is a feature of the EU Internal Electricity Market, but as it stands from January 1 2021, the interconnectors will cease to be dispatched by implicitly market coupled day-ahead auctions on each side of the interconnector. This will reduce the liquidity coming into the GB market and decrease the efficiency of power transfers at the borders. Whilst this might offer opportunities for traders on these interconnectors, it brings additional uncertainty in relation to the construction of these planned connections.

Despite these barriers, the British electricity market is undoubtedly set to change due to increased levels of interconnection with the continent, irrespective of Brexit and any resulting changes to how these markets operate. Over the next three years, that interconnectivity will more than double to be around 25% of the GB market size, which will have a significant and potentially unprecedented impact on how this island market operates. Along with increasing build-out of renewables in both Britain and in neighbouring markets and all of the changes that build-out entails, the market will be increasingly dictated by the activity on its interconnectors to its neighbouring markets. Whilst Britain is set to leave the EU, as far as power markets are concerned it is set to increasingly look less like an island.