Interconnectors and open cycle gas turbine plants (OCGTs) were the big winners in the latest T-4 auction. The T-4 Capacity Auction for delivery in 2024/25 concluded last week, clearing in Round 12 with a clearing price of £18/kW/year and a total procured de-rated capacity volume of 40.8GW. A total of 52.0GW of de-rated capacity entered the auction, 79% of which was accepted.

The clearing price is higher than the £15.97/kW/year seen in last year’s T-4 auction, though down from the recent T-1 auction, which cleared at a record high £45.00/kW/year. The price in the T-1 auction closed in the early rounds when a single large coal unit, West Burton A, exited the auction.

The higher price in the latest T-4 auction is in part due to existing large and old power stations starting to drop out of the auctions earlier causing the price to be set by newer power stations. This trend is likely to continue as renewables contribute a greater share of Britain’s power mix and the ‘Lost Money’ that the capacity mechanism seeks to replace becomes more of an issue for the larger inflexible power stations.

Our analysis of this year’s T-4 results showed that interconnectors were awarded 6.9GW of contracts compared to 5.3GW last year, while gas-fired generation won 26.4GW of contracts – down slightly from the 27.3GW secured last year. Gas retained the largest share of awarded capacity (64.7% compared to 62.5% last year), followed by interconnectors, while wind, solar and battery storage all saw increases from the previous year.

Our analysis also highlights the lower volume of contracts awarded to nuclear and coal plants as Britain moves towards a greener future. No coal units won a contract in the latest auction, compared with the 1.3GW secured last year, while nuclear units were awarded only 2.0GW, down from 4.0GW in the 2023-24 T-4 auction. The nuclear plants that secured a contract in last year’s auction but participated unsuccessfully in this year’s auction are Dungeness B1, Heysham 2 CMU7 and Torness 1.

OCGTs and interconnectors were the big winners in the latest T-4 auction. OCGTs are larger capacity units than the reciprocating engine-based units that have filled the peaking segment of the market in previous auctions and may represent a change in direction for the market as embedded benefits for smaller units diminish. Meanwhile, interconnectors are becoming increasingly important to Britain’s power system. Increased interconnection with neighbouring markets will enable excess power, such as that generated from wind and solar farms, to be traded and shared between countries. This will however require efficient markets and cross border trading arrangements which currently are still being developed in a post Brexit world.

The low volume of contracts awarded to coal units reflects Britain’s move to a greener future with Britain is set to phase out coal generation in 2025b being one year after the year this auction applied to. Indeed, talks are underway to potentially bring this date forward.

Some of the Nuclear units did not take contracts signalling that Nuclear plants are getting closer to their planned closure dates, while Britain is set to phase out coal generation in 2025. Indeed, talks are underway to potentially bring this date forward.

Wind farms accounted for 27MW of contracts (all onshore), up from 11MW in the previous T-4. Solar units were awarded 13MW of contracts, matching the amount secured in the recent T-1 having not received any in the previous T-4. Wind was first allowed to enter the capacity mechanism auctions in 2019, and solar in 2020. Due to de-rating the actual revenue receivable under the capacity mechanism for renewable projects is low so the taking of contracts indicates that decisions to build these assets were taken in advance of the auction.

A summary of the latest T-4 auction results is shown below. Other notable highlights from the auction include contract wins for several new-build interconnectors:

Drax secured contracts for three OCGT units yet to be built, at 285MW each, totalling 855MW. Seven units won contracts with a capacity of over 1GW, including the French interconnector EFA1 and the North Sea Link. The rest were gas units.

Though there are fewer new builds (87 compared with 98 last year), the units to be built are generally larger, totalling 5.3GW of awarded contracts – up from 4.4GW last year. 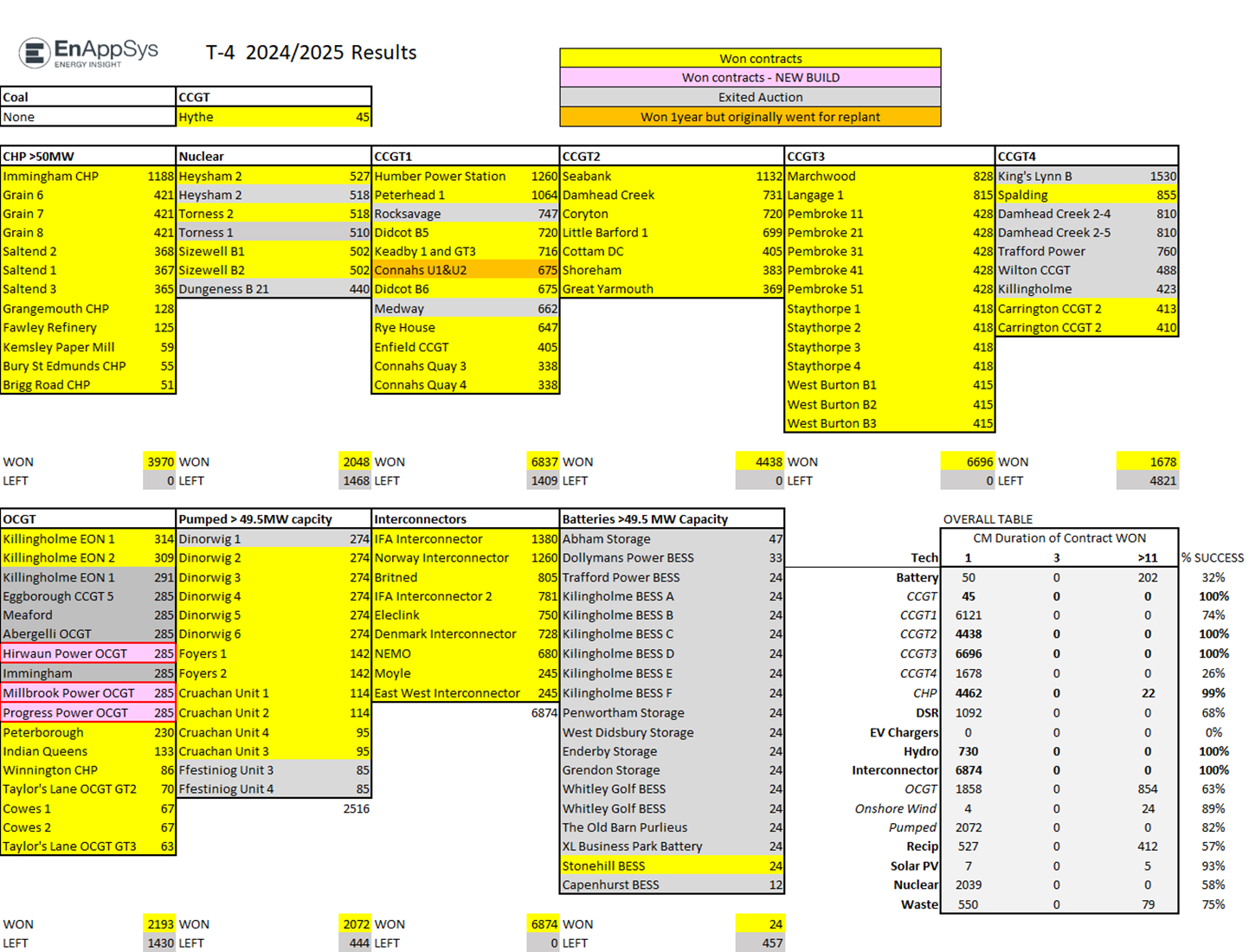 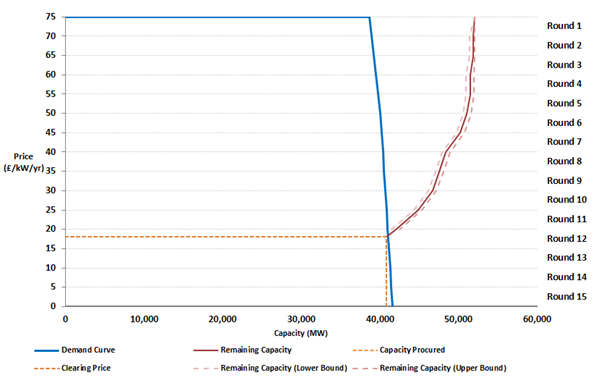 The Capacity Market is a mechanism introduced by the government to ensure that electricity supply continues to meet demand as more volatile and unpredictable renewable generation plants come on stream.

In the T-4 auction, potential Capacity Market participants can bid for contracts in auctions held four years ahead of the delivery date. During the delivery year, capacity providers will receive monthly payments for their agreed obligation at the auction clearing price. Providers are expected to be available to respond with their agreed generation volumes or load reductions when called on by National Grid at times of system stress.

The auctions follow a descending clock format, starting with offers of £75/kW/year and gradually reducing until the minimum price is reached, at which the supply of capacity offered by bidders is equal to the volume required.