In the first six months of this year, generation from this power source across Europe amounted to 68TWh – up from the 59TWh in the corresponding period in 2019 and 70% higher than the 2015 figure of 40TWh. 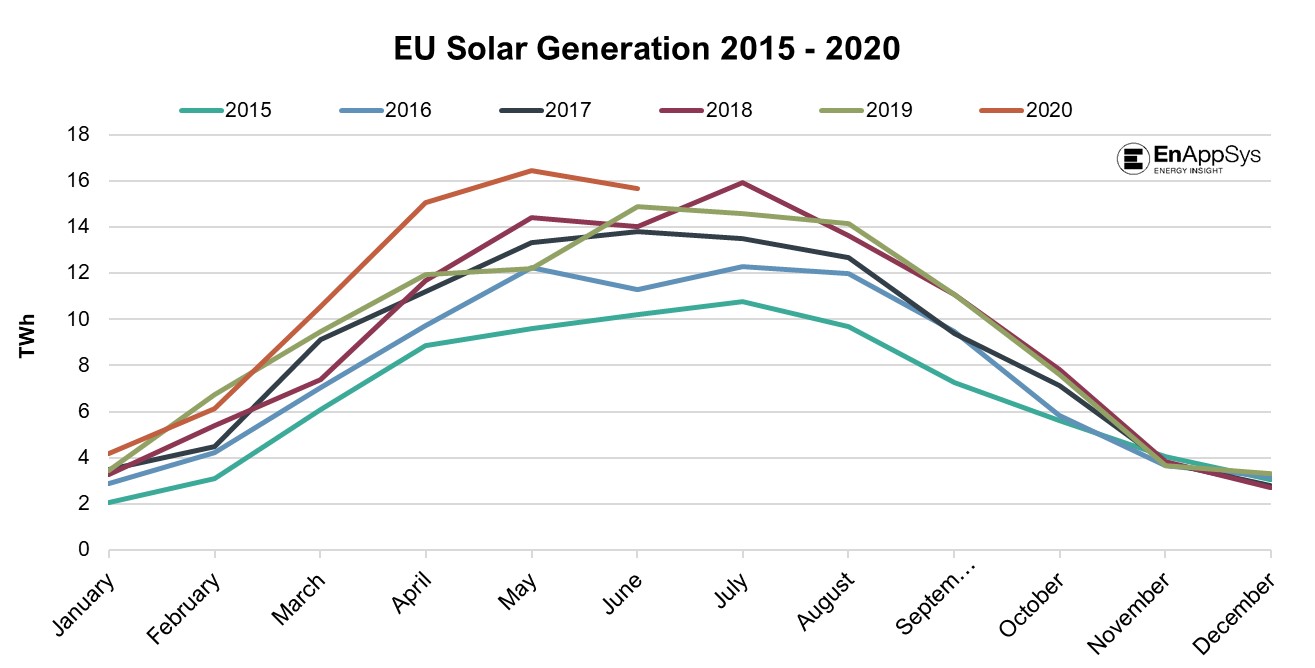 The rise was attributed to the increase in solar capacity across Europe, as countries across the continent attempt to improve their environmental footprint by producing a greater proportion of electricity from renewable sources.

What is happening in 2020 that was not happening over the previous three years?

Fifteen years ago, solar farms provided only a very minor contribution towards overall European power demand, with only a few GWs of solar projects across the entire continent. These provided only a nominal share of overall power production.
By 2011 solar was in the middle of a transformational phase and over a five-year period from 2009 to 2013, levels of solar capacity in Europe exploded from around 15GW at the start of 2009 to around six times that figure by the start of 2013.

This transformation was driven primarily by sharp rises in capacity particularly in Germany and Italy, but since the start of 2013 levels of increase have tailed off, with growth within Britain and a steady trickle of new capacity in Germany providing much of the growth. As growth in these regions have tailed off, more recently it has predominantly been France and Spain that have driven forwards the growth of solar production.

Other countries such as Bulgaria, Greece and Portugal have also been seeing growth in solar output recently, but these growth levels are smaller in terms of the overall size of the increments. Germany has one of the largest levels of solar capacity (more than 50 GW) in the world, behind China, the US and Japan.

The growth of solar capacity in Germany started in earnest in 2009 and was supported by generous subsidies, which led to a raft of rooftop solar installations. Near the peak in growth of solar capacity in Germany, a cap was introduced at 52GW, after which subsidy support would cease to become available or would become more tightly controlled via auctions.

In 2019 this cap was removed as levels of solar installed started to close in on this upper limit, but levels of subsidy support have been declining in Germany and this has acted to slow the growth that still occurs.

The use of auctions means that the price of renewable subsidies is no longer set by the government, but is instead market-driven, and the price of Feed in Tariffs (FITs) have been falling since this change in 2014 as a result.

“The use of auctions means that the price of renewable subsidies is no longer set by the government, but is instead market-driven, and the price of Feed in Tariffs (FITs) have been falling since this change in 2014 as a result”

In Italy the market was similarly able to benefit from government incentives to build out over a similar time range, with installations slowing after significant cuts were made in order to reduce the impact upon consumers’ electricity bills.

The UK also saw a similar, but slightly later boom and bust-style build-out with developers rapidly taking subsidies as panel prices fell faster than subsidy values. The rate of build-out subsequently fell with the introduction of a new, more restrictive subsidy regime. After cuts in subsidy regimes occurred across European markets, growth in build-out has since slowed, partly due to lower incentives, and also influenced by reduced investor confidence in the reliability of existing schemes.

Spain was another region where subsidy support was removed, having provided early support for renewables, but in 2017 new more controlled auctions that benefit from large reductions in solar costs meant that solar is booming in Spain once again in a region very well suited to generating power from this source. So far in 2020, solar PV in Spain has climbed to peak output levels of 7.1GW (up 51% from 4.7GW in 2019), with levels of generation from solar thermal (peaking at 2.2GW) remaining consistent. Further increases are likely in future years, albeit COVID-19 is likely to slow any increases. 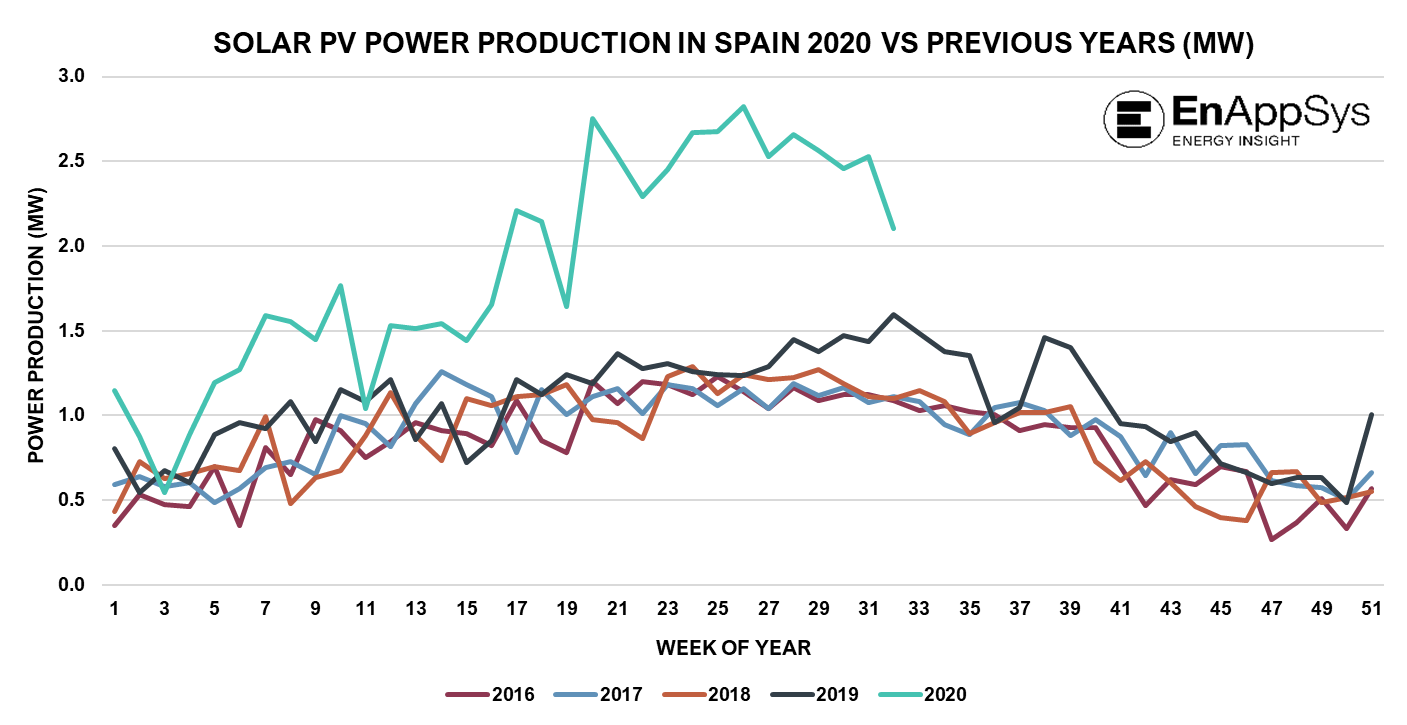 In 2020 in France the increase in solar generation has been slower but peaks have still risen to 7.5GW (from 6.7GW in 2019). Although this is a small rise, France is looking to sell 2.9GW annually between 2019 and 2025. This is intended to add 17.2GW of solar by 2025, which would be a significant rise in solar capacity in this country and in Europe.

In both France and Spain, governments responded with urgent reforms in the face of increasing subsidy costs, which plunged the industry in both countries into a period of uncertainty from which it has only recently begun to recover. Retroactive reductions to feed-in tariffs for existing installations in Spain and – in the case of France – the temporary suspension of the FIT scheme in 2011 led to the dramatic burst of a speculative boom, born out of generous policies. Since 2016, however, both France and Spain have set ambitious growth targets to be achieved by the introduction of regular auctions for utility-scale projects to be supported via a feed-in premium system.

Another factor behind the rapidly rising capacity figures is an increase in large solar installations. In April Iberdrola connected Europe’s largest solar farm to date, the 500MW Nuñez de Balbao facility in northern Spain. The project aims to supply electricity to local industries through corporate PPAs, signalling a shift away from government subsidies. The company has also recently begun construction of another 350MW megafarm.

One of the new dynamics to consider going forwards is the fact that markets are now seeing projects come to the end of their subsidy support regimes (often 15 or 20 years in length), which means that these projects are now by default set to start floating on market prices.

“One of the new dynamics to consider going forwards is the fact that markets are now seeing projects come to the end of their subsidy support regimes (often 15 or 20 years in length), which means that these projects are now by default set to start floating on market prices.”

This becomes crucial as levels of capacity start to exceed levels of demand adjusted for levels of additional wind and nuclear generation. This creates an oversupply that requires either increased exports or curtailment of one of these power sources.

Where a subsidy exists that still applies in the case of negative pricing, such an asset will be willing to sell power for a negative price as long as the price it is effectively paying to generate is smaller than the sum it will receive as a subsidy. At the other end of the extreme, a generator without a subsidy should turn off as market prices close in on zero.

For large solar parks this management process is likely to become part of managing an older project, but for rooftop solar projects the impact will depend on how the owner is charged for electricity. Where a project owner is charged for their actual half hourly usage and at prices reflecting the market, solar production without a subsidy during periods of excess supply is likely to drop significantly.

This effect, combined with the more manageable costs of solar now compared to a decade ago, suggest that Europe could be on the cusp of a new dawn of solar expansion across Europe.

However, the problem of solar being concentrated into the middle of the day remains and it will be when sufficiently cheap storage can be delivered alongside solar projects that the sun will shine brightly on solar in Europe again.