Britain has overtaken Spain to become the second highest producer of wind generation in Europe.

The data looked at levels of European wind generation in the first 23 weeks of 2020 (January to end May) and found that Britain ranked second after Germany during the period.

Britain generated 12.2% of the overall share, a 3% increase compared to the same period in 2019, while Spain’s contribution decreased from 13% to 10.7%. The increase in GB generation was a result of an increase in installed wind capacity of 4% and an increase in generation of over 30% on a like-for-like basis versus 2019. The last two months of the period saw a decline; this was attributable to a combination of low wind, requirements to reduce wind generation as a result of low demand due to COVID-19, and the very mild weather in the period.

Wind generation’s newest record peaked at the end of February, with 14.9 TWh produced. In this particular week, Germany contributed about 40% of the total followed by GB with 13%. France ranked in third place (9%) followed by Spain (4%). 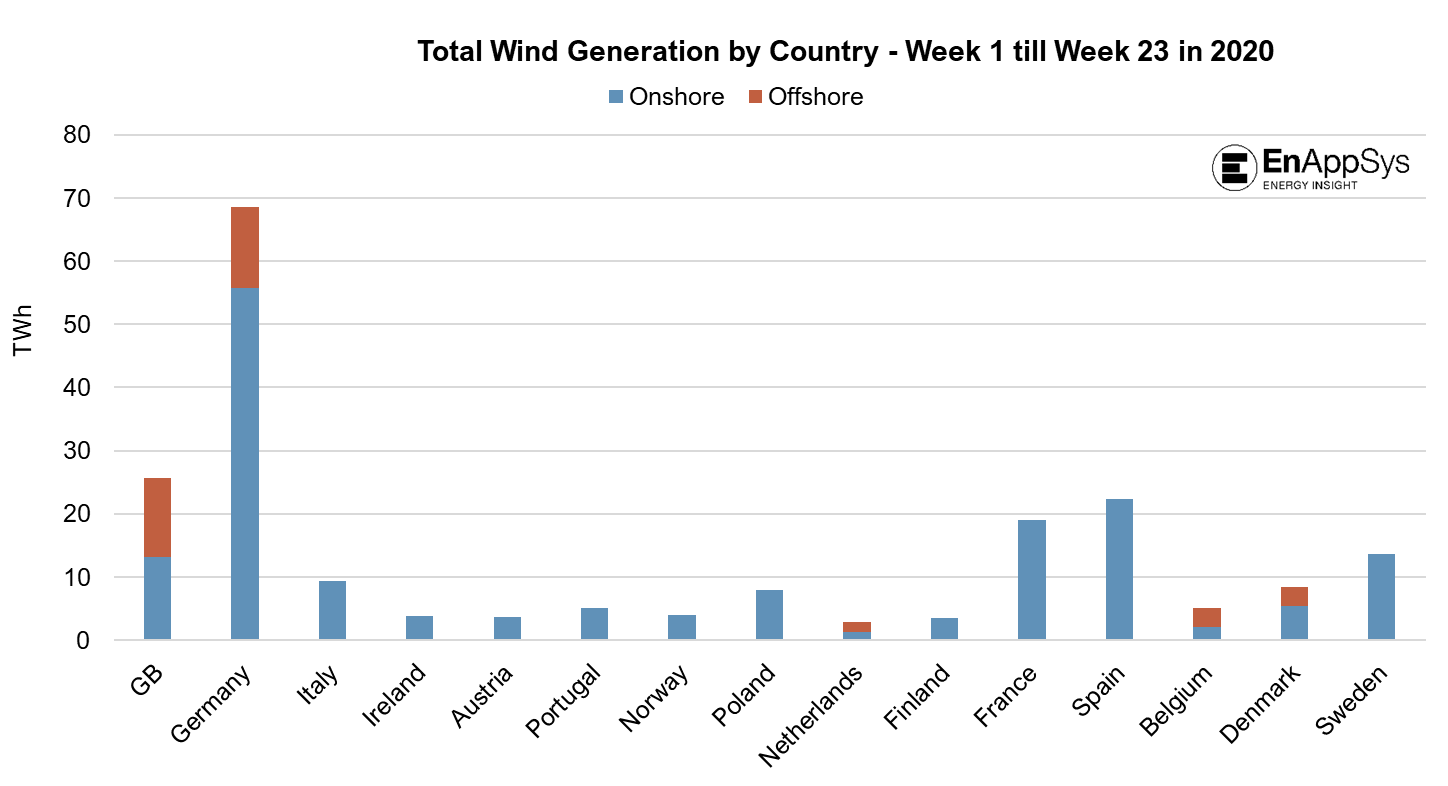 At the beginning of March, it was noticeable that Spain experienced strong winds that generated approximately 20% of the total European wind generation, which represents a total of 2 TWh. In this time period, Spain was also able to export its surplus energy to France. Hence, Spain ranked in second place after Germany, which contributed only about 6% more during this week. Furthermore, Spain was the only country other than Germany that was able to generate more than 2 TWh of wind generation during a single week.

Overall Germany contributed the highest share of wind generation during the 23-week period – 69 TWh in total including onshore and offshore generation. This was followed by GB with 26 TWh. Although Spain’s wind generation peaked higher than GB’s wind generation, GB experienced steadier winds over this time period. As a result, GB ranked second with a total of 25.6 TWh followed by Spain with 22.3 TWh.

Installed levels of renewable generation continue to grow in the GB market, particularly offshore wind, and there are a number of large projects under construction that should see GB close the gap in the ‘league table’ with Germany as the leading wind generation country. The reduced electricity demand has enabled grid and market stakeholders to see the operation of markets with very high renewables. This has accelerated the implementation of new market tools and grid management approaches to enable the carbon benefits of renewable generation to be realised now and into the future.