Britain’s exit from the EU has resulted in reduced trading on the electricity interconnectors between GB and Ireland and increased the frequency of extreme prices.

The GB electricity market left the internal energy market of the European Union (IEM) following the end of the Brexit transition period on January 1, 2021. As part of the withdrawal agreement between the UK and the EU, the Northern Ireland protocol ensured that the single electricity market (SEM) of the island of Ireland would remain intact. However, the effect of the GB electricity market leaving the IEM has still resulted in a decrease in the use of the SEM’s interconnectors that link it with Britain.

Before January 1 2021, the day-ahead auction with its large volume and deep liquidity cleared and dispatched the interconnectors in an efficient manner. The IDA1 and IDA2 auctions then made fine detail changes to the interconnector dispatch and their imports and export volumes did not change that much. Average utilisation in January was around 350 MW, compared with 500MW prior to Brexit. The January figure was the typical level when one of the interconnectors suffered an outage before the GB left the IEM.

This reduced usage had led to an increase in the frequency of extreme prices as liquidity decreased.

Before Brexit, the SEM was coupled with the IEM via the two interconnectors to GB, via a common day-ahead auction that ran at 11 AM for the following day. This ensured that if prices were higher in the SEM than in GB, energy would flow from GB to the SEM to reduce prices for consumers in the SEM and vice versa.

With GB leaving the IEM, the two markets are no longer coupled across the two interconnectors that link both islands – the island of GB and the island of Ireland – for the common 11 AM day-ahead auction.  The GB interconnector provides an additional 1 GW of capacity which is equivalent to 15% to 30% of SEM’s energy demand of 3GW to 7GW which depends on the time and day of the season.

As the interconnectors no longer participate in the common day-ahead auction, the liquidity pool is therefore reduced, both in the SEM and the GB market. This means that prices in both markets will be more extreme as they no longer share energy at the day-ahead stage. For the 11 AM day-ahead auction, 11 of the 14 highest prices ever seen have occurred since Britain left the IEM with the peak value being €500/MWh equivalent to 50c per kWh unit. 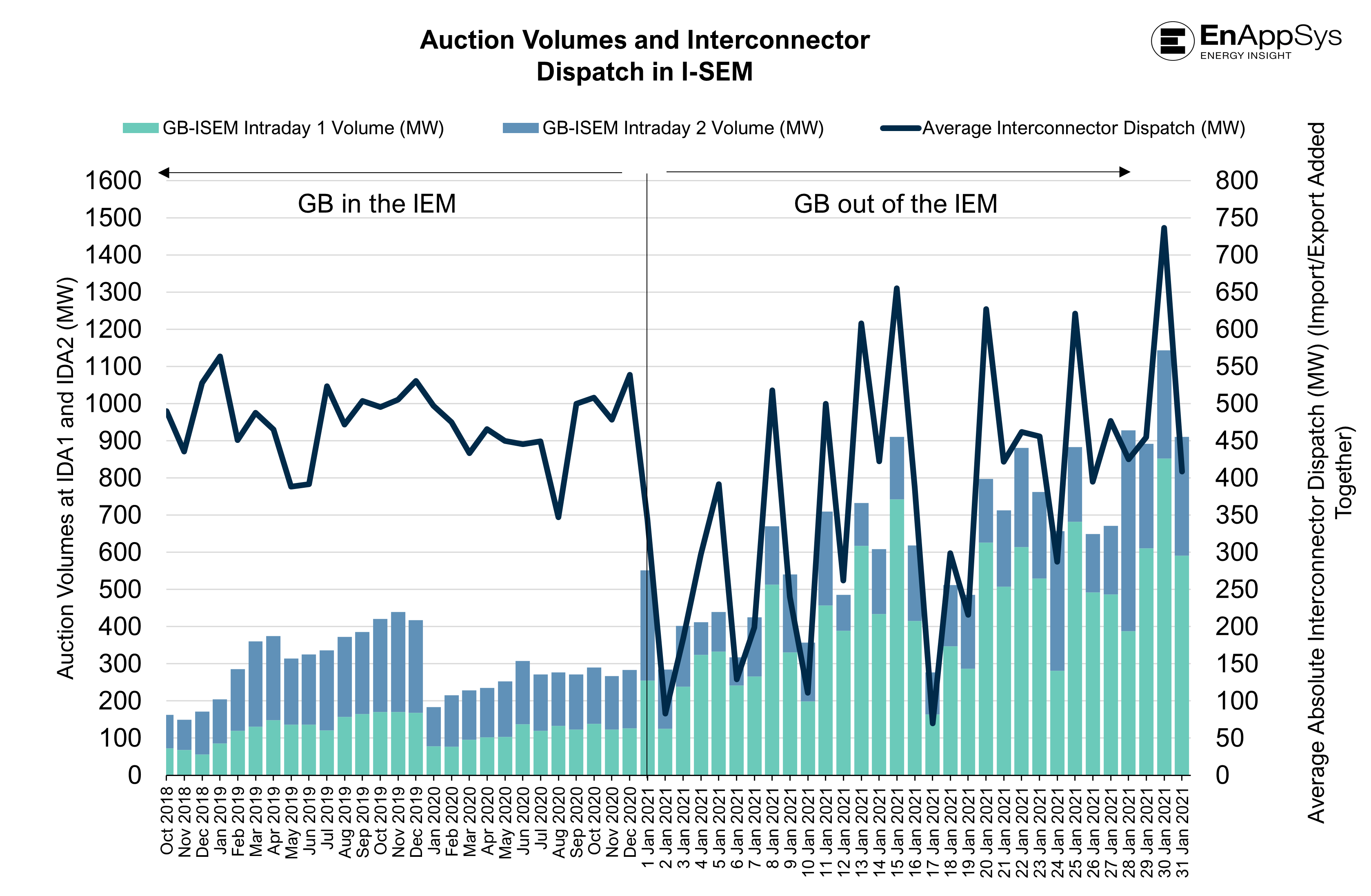 In turn, this means that the SEM needs access to more indigenous generation which may be more expensive than in GB. In addition, when it is windy in Ireland there is less opportunity to push this excess wind energy over the interconnector to GB.

It is likely that the reduction in the ability to bring in cheaper power from GB or export cheaper power to GB will result in more extreme prices in the future. The current situation with lower-than-usual dispatch on the interconnectors will continue until SEM market participants increase their use of the IDA1 and IDA2 auctions. This also requires more participation on the GB side.

Having a closer look at the four auctions

The four auctions in the SEM market are the Day-Ahead auction, the two GB-coupled intraday auctions IDA1 and IDA2 and the final SEM only auction IDA3. As can be seen on Figure 2, the main auction is at the day-ahead and remains so. This is because some features of the market rules are using the day-ahead auction price as a reference point, for example the capacity mechanism cap price for suppliers and the excess wind energy curtailment price so there is a need to clear most of the volume in this auction.

The chart clearly shows the increase in volumes in the IDA1 and IDA2 auctions in January 2021 as parties move volume into the two auctions. However, these auctions are also dependent to a degree on participants on the GB side entering into the auction to create an auction with enough cross-border liquidity to flow across the interconnectors. Also, in any traded market there is a preference to settle in the trade venue with the largest volume as this gives the most representative price. This contributes to the day-ahead auction remaining the primary auction in Ireland even though it is now “islanded” from the rest of Europe. 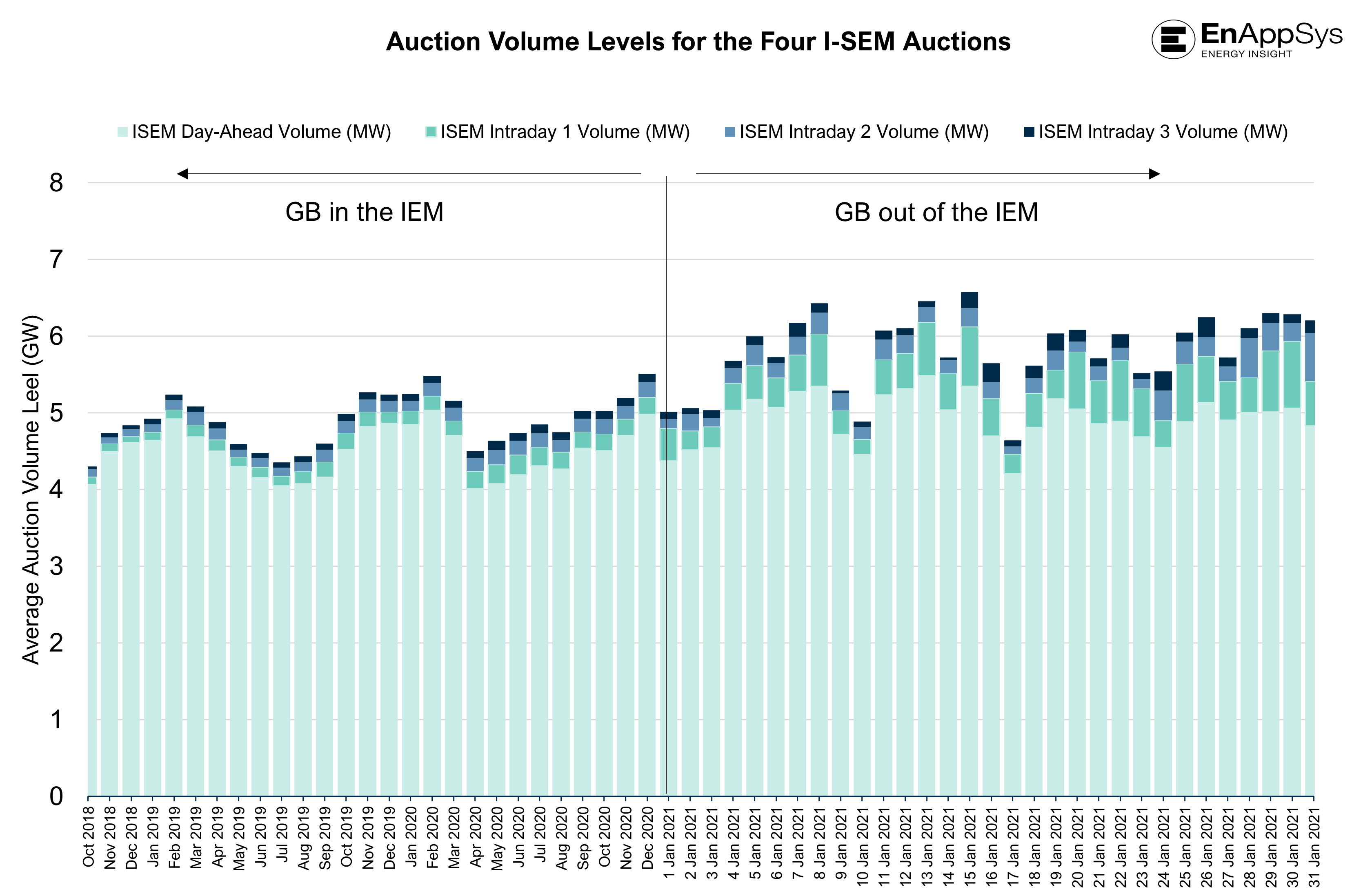 Figure 2: Auction Volume Levels for the Four I-SEM Auctions. The figure shows how the SEM market clears in its different auctions. The chart shows the monthly average of auction levels for the first months of the SEM whilst GB was still in the IEM. Since January 1, 2021, the average auction levels are shown on a day-to-day basis.

Utilisation of Moyle and the East-West Interconnector

This preferential loading is because the Moyle interconnector has a loss over its length of 2.36% over the short distance of straits of Moyle (63.5km) whereas the East-West interconnector’s loss across the cable is 4.68% as it has to traverse a much longer distance from North of Dublin to Shotton in Deeside (261km).

In the long run the new Trade and Cooperation Agreement between the UK and the European Union includes a timetable to create some sort of loose market coupling at the day-ahead with markets adjacent to GB. However, this is not going to be implemented until April 2022 at the earliest.

Further down the line, the Celtic Interconnector with France, which should be operational in 2026, will provide a reconnection back into the EU IEM.

Until the current arrangements include some sort of higher volume auction connection between the GB market and the SEM, the interconnectors will continue to be used inefficiently and impact on pricing in the SEM and GB markets with extreme pricing events likely to be more frequent.