Prices in the GB electricity market soared at the beginning of this month.

Traditionally the first week in March is a high demand week, as between November 1 and February 28 the transmission charging arrangements encourage companies to reduce consumption (so called triad periods). From March 1, triad season is over and this encourages higher demand in the evening peak.

This combined with low levels of wind generation in the first week of March this year meant that the GB electricity market was dependent on imports from the continent to meet demand in the evening peak.

On March 2 and 3, the interconnector capacity auctions for the evening peak resulted in high prices. In these auctions the interconnectors were the marginal source of power, which meant that they could set the market price. The high-capacity auction prices mean that to make a profit, the purchasers of the capacity need to clear at a price higher than the cost of the capacity and the price they can buy power at in France, Belgium or the Netherlands.

Now that the GB market has left the EU internal energy market, it has left the day-ahead market coupling arrangements. The IEM day-ahead market coupling process with its implicit allocation of capacity on the interconnectors has meant that power flowed from the continent to the GB market at a much lower price. However, with the interconnectors now falling back to explicit auctions, this has resulted in extreme prices for capacity when the GB market is under stress.

Whilst the recent high price events could be seen as an unusual occurrence, it appears that these special events are becoming more frequent in the power market. This pattern of behaviour in the market can be firmly placed at the door of the interconnector trading arrangements.

The new trade and cooperation agreement between the UK and the EU has provision for a loose market coupling arrangement to be established between the GB market and adjacent EU markets by April 2022. This is an ambitious timescale for the TSOs and regulators to gain approval, so in the interim high price peaks and higher balancing costs will become a feature of the GB electricity market. With two small suppliers already going to the wall since the new year, it is an increasingly difficult market to operate in for these new entrants as credit requirements have increased.

January 2021 in the GB power market has not passed by unnoticed.

Low margin and new market arrangements on the interconnectors post Brexit, resulted in extreme prices. In the day-ahead market we noticed prices up to £1500/MWh. While such extreme events incorporate obvious risks, they can also be great opportunities when using the right tools and strategy.  We calculated how our day-ahead price forecast performed.

As part of the EnAppSys product suite for our GB platform we include a day-ahead price forecast. This forecast starts with fundamentals where we run a stack model to come up with a marginal cost of production. On top of that a layer of sentiment analysis is used to arrive at a prediction for the day-ahead price. This prediction, together with the inputs can be used to build your own models to account for individual preferences and experience.

Our day-ahead forecast aims to provide a different view on how the market clears. When the model runs it gets the best possible view on the price for the intraday market. This model is suited to strategies around time-shift arbitrage.

With the extreme prices in January 2021, bumper profits could have been realised from our model using the right approach: Using the model, a position on the day-ahead market can be taken, and then leaving the position to imbalance cash-out. If we are predicting a higher day-ahead price than the auction price out-turn we buy and if we predict a lower price we will short the day-ahead.

Generally the model performed well over 2020, despite Covid-19, yielding around £5,000 per year with 1MW deployed in the market and a profit of 91p/MWh. This performance could be improved by closing positions early in the Intraday but with a simple dumb strategy of going from Day-Ahead to System Price it is a strategy that requires little effort.

As shown in Figure 1, this came with some major swings against the market on some days, which may frighten a risk manager, but in the round, it was very successful. Figure 2 shows how the profits were spread. It can be noticed that these high prices were only a small number of positions.

Do you want to know more about our products for beyond intraday? Please do not hesitate to get in contact with Kathleen Dingenen and her team. 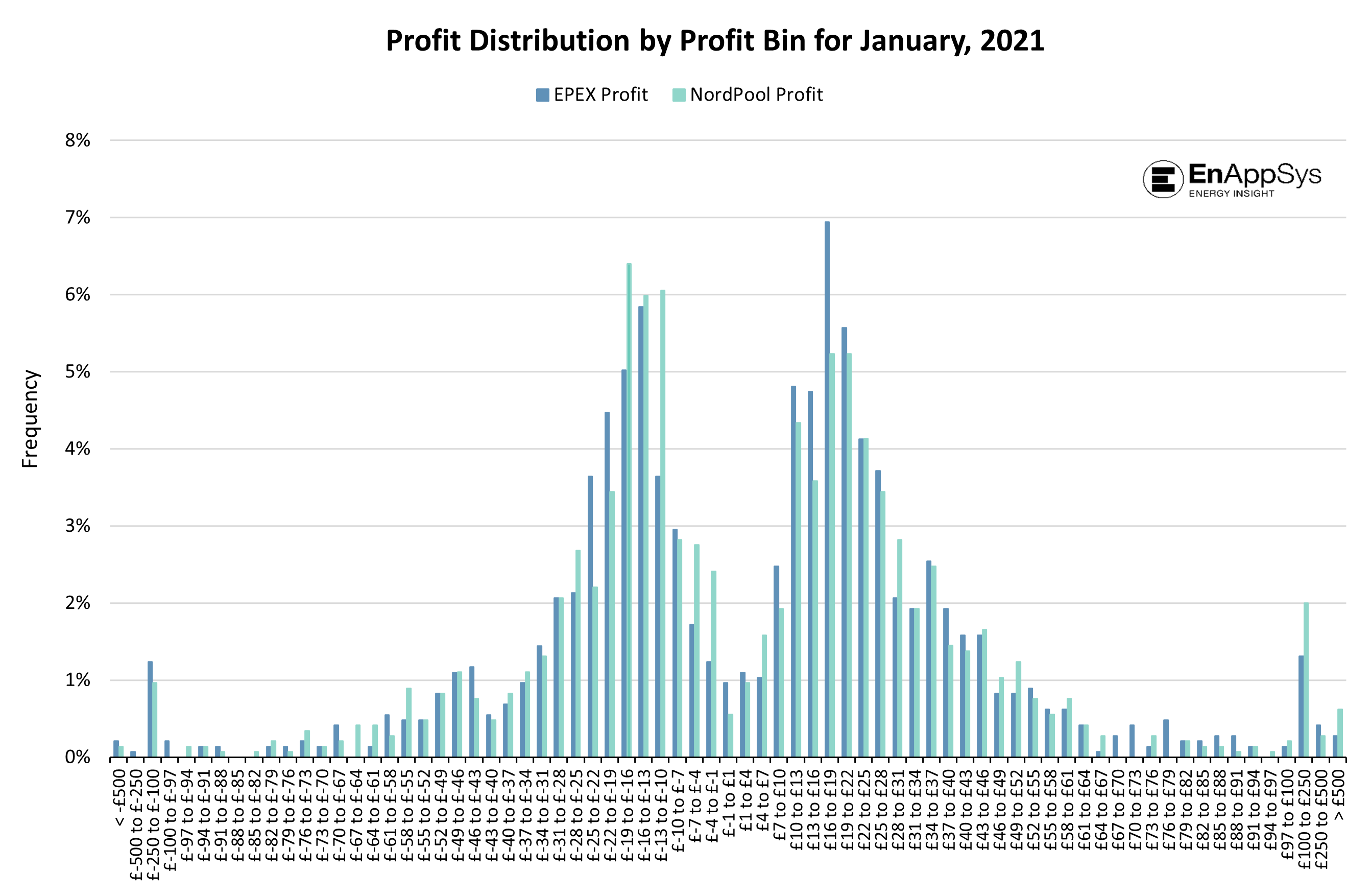