The planned timeline for ending coal power generation in Germany could cause the country significant challenges as it battles to meet future electricity demand.

That’s a key conclusion from our new white paper on Germany’s coal phase-out plans. Under current plans, the deadline for the complete phase-out of coal in Germany is the end of 2038, with the aim of bringing this forward to 2035. However, coal is currently so strongly entrenched in German energy systems that a total withdrawal of it by this date will need to clear some hurdles.

Such a fundamental change in the power supply will have consequences in the wholesale and balancing markets and requires smart allocation of resources – otherwise there may be greater electricity price volatility as well as potential threats to security of supply and grid stability. Another challenge outlined in the white paper is the feasibility of planned renewable developments, which would be needed to fill the demand gap left by declining coal generation and the ongoing decommissioning of nuclear power plants.

Germany has a long history of coal which drove the growth of one of the most powerful industries of the world for decades. Although in recent years the industry has seen significant decline, coal and lignite still make up a significant proportion of Germany’s fuel mix today. Now, however, German power and balancing markets are undergoing fundamental changes with the parallel decommissioning of coal and nuclear power plants. This provides critical challenges for Germany, both politically and economically. 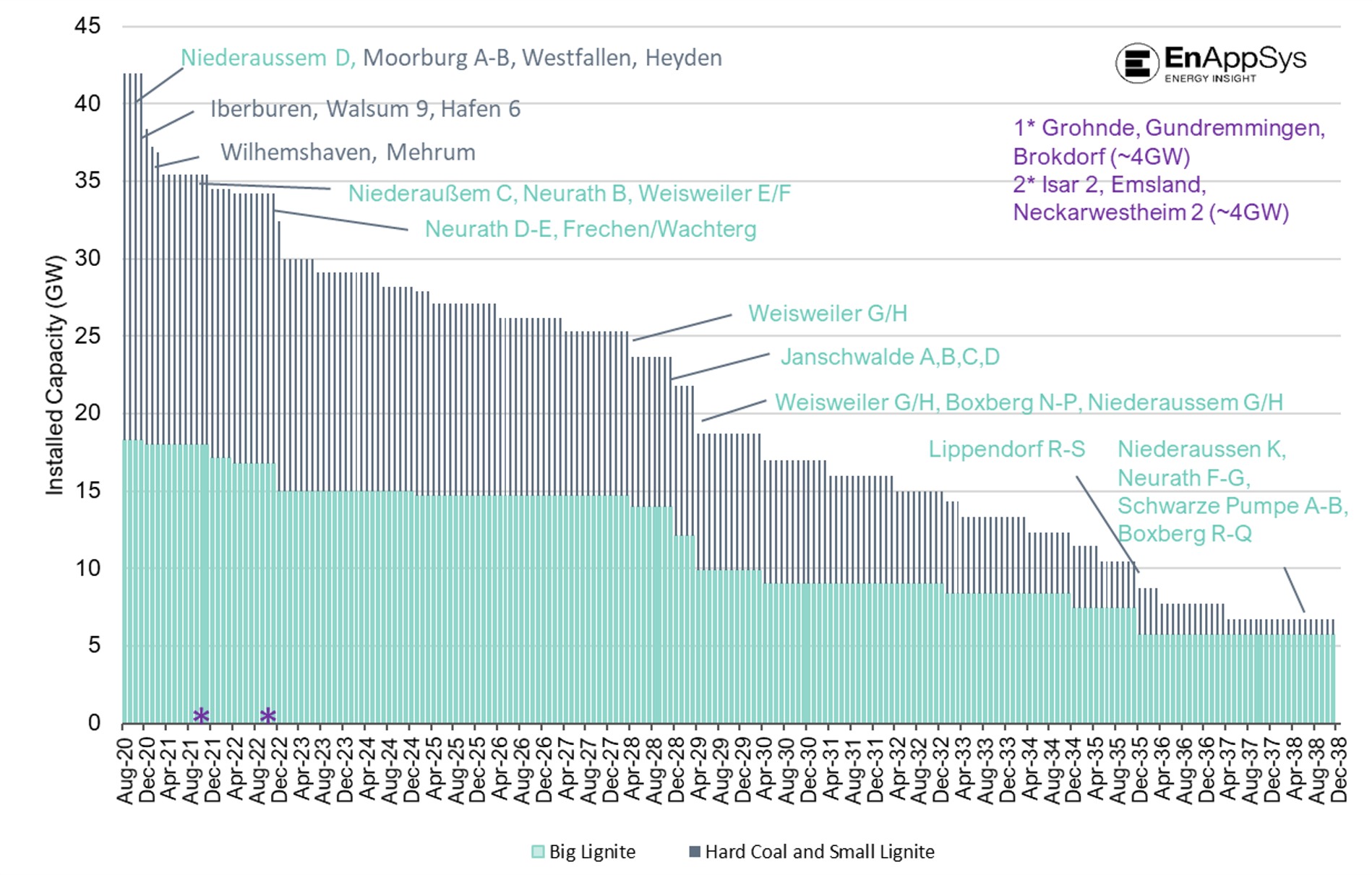 The Federal Audit Centre (Bundesrechnungshof) has accused the government of failing to run an economically feasible Energiewende (transition to a low-carbon economy), stating that the associated phase-out plans are endangering the competitive edge of the German industry and security of supply. Indeed, there are widespread concerns that the plan to increase renewables’ share of the fuel mix to 65% will not be met.

By current estimations, there will be a need for around 18GW of additional gas capacity to fill the gap after the phase-outs and enable the planned renewable integration by 2030. Germany currently imports 93% of its gas supplies, mainly from Russia, The Netherlands and Norway, but Dutch gas will be seriously reduced, if not completely, due to the termination of the activities in the Groningen field by 2022. This will increase the need to diversify power supplies, otherwise security of supply could be seriously affected.

Security of supply was tight last winter – plants that had been closed down had to be brought back into service to meet demand – and this pattern could be repeated more regularly in future, triggering potentially steep price rises. The blame for extreme system prices usually rests on the shoulders of renewables rather than on market design. Currently there is so much concern about meeting demand in power markets after the phase-outs that not much attention has been paid to narrowing spinning reserves and qualified volumes for aFRR and mFRR, two key components of Germany’s balancing market.

According to September 2020 data, hard coal, lignite and nuclear make up a large portion of the qualified capacity to deliver FCR (23%), aFRR (12%) and mFRR (28%). Following the coal and nuclear phase-out, this capacity will have to be delivered by other assets. It’s expected that gas will need to step into the aFRR and mFRR markets and batteries will deliver more FCR, but at the speed things are going to change, this may come with temporary scarcity of capacity and associated higher availability prices.

The white paper presents a wide-ranging analysis of the current and potential issues of the coal phase-out, exploring the distortion of the Energy-only-Market principle, the controversial compensations for lignite giants, the coal late-comer Datteln 4, feasibility of the renewable development plan, the security-of-supply, German slacklining between the centripetal forces of Russian and US gas, grid stability and electricity prices. 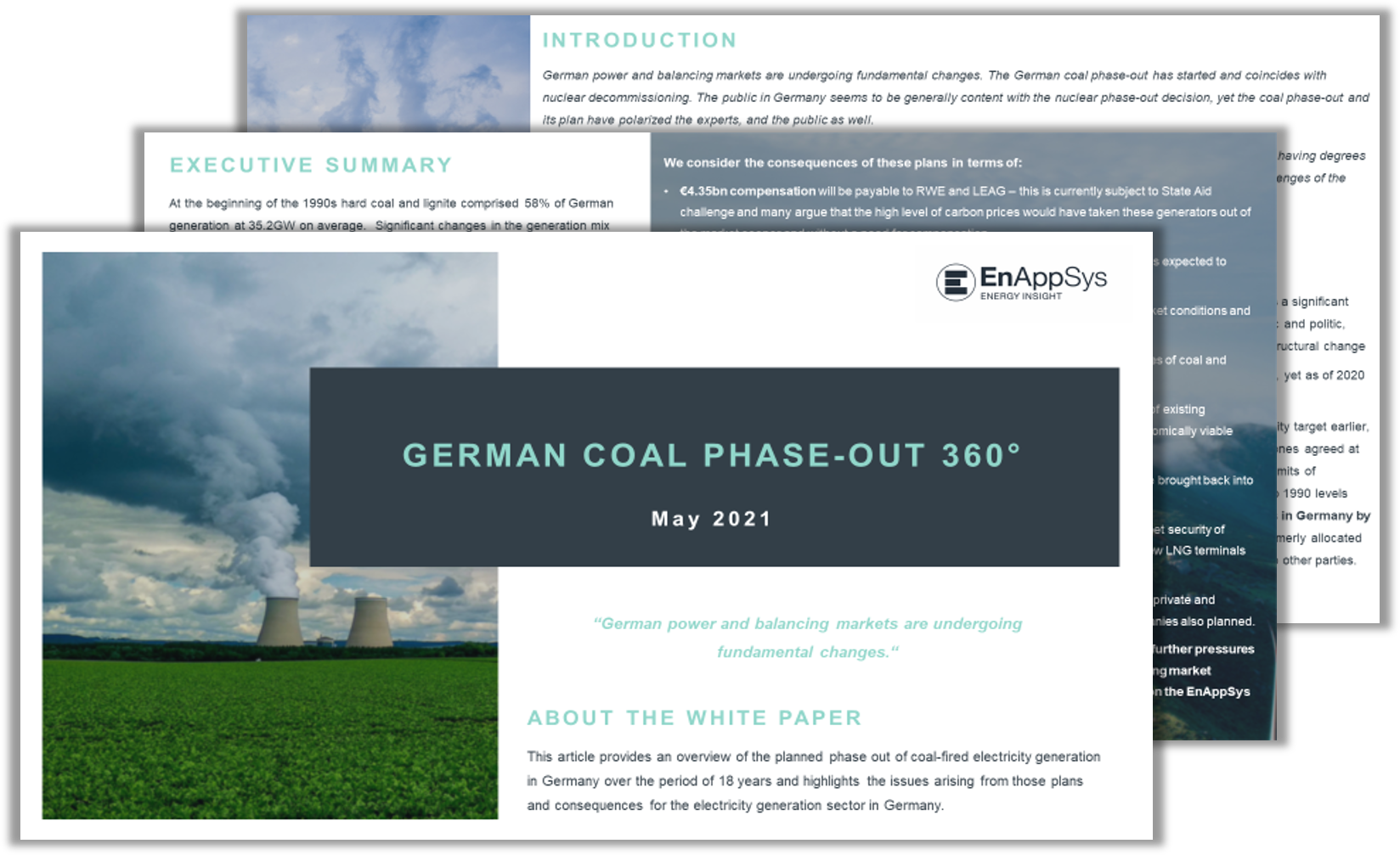