National Grid ESO has procured a number of emergency coal contracts for the winter. This will keep on coal units from Drax and West Burton A with a unit at Ratcliffe that was due to be decommissioned. The cost will be between £340m and £395m. These actions enter the imbalance pricing stack and impact on imbalance prices in a complicated way.

Key Takeaway: Elexon may potentially publish incorrect system imbalance prices after the end of the settlement period on www.bmreports.com when NG ESO is running contingency coal contracts. EnAppSys has changed its systems to calculate a more accurate system price closer to the final outturn price in settlement. When contingency coal is running EnAppSys prices should be more accurate than Elexon prices on BM reports. Elexon will revise its system prices in settlement after (at best) 5 working days.

Detail: The plants will be activated by National Grid in the balancing mechanism and their price will be set at £0/MWh and the action will be system tagged. There has been a modification that was approved on Friday (21st October 2022) and implemented on Monday (24th October 2022) which changes how these actions are treated in determining the imbalance price. When it gets to settlement timescales the zero priced BOA will be removed and the action on the coal unit will be placed into the imbalance pricing stack as a system tagged BSAD action at £99,999/MWh.

The impact of this will be that the coal units will move from the bottom of the imbalance pricing stack to always be at the top of the stack and because of the rules around system tagging they will not be priced at £99,999 but the most expensive energy action in the stack. So, if for example the most expensive energy action is a gas station at £500/MWh then the effective price of the contingency coal action is £500/MWh.

On (25th October 2022) National Grid ESO activated a unit at West Burton A for testing in advance of winter proper. The impact of pricing at £0/MWh caused some arbitrage in the imbalance pricing algorithm and the imbalance price for period 31 was reported as £0/MWh because it was set by an action on the sell side that was priced at £0/MWh. This chart shows the EnAppSys prices for yesterday which should be more accurate as there will be no arbitrage now as we have repriced the contingency coal action at £99,999 to take it to the top of the buy side stack. 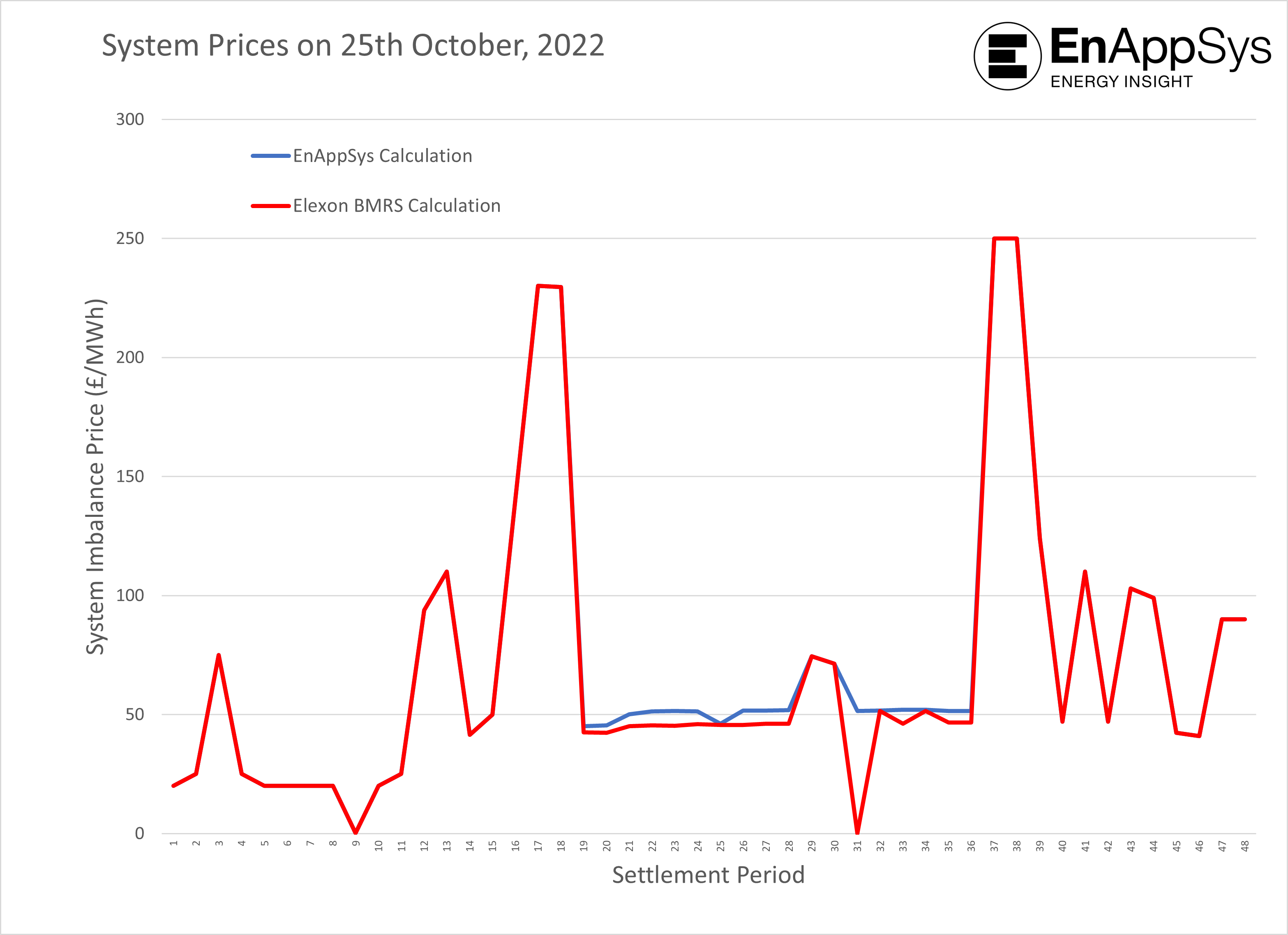 In summary when contingency coal is running, EnAppSys prices should be more accurate than Elexon prices on BM reports. Elexon will revise its system prices in settlement after (at best) 5 working days.