France overtook Norway to regain its position as the biggest net exporter of power in Europe in the first half of 2021.

The value of imports and exports in Europe during the first six months of 2021 were looked at. France’s total net exports amounted to 21TWh, with most of the power flowing to Great Britain (8.6TWh) and Italy (7.2TWh).

France’s nuclear generation levels were similar to levels in previous years (apart from 2020) but energy exports were far higher. This is because demand has not recovered to pre-COVID levels so with similar levels of nuclear generation, France is exporting more.

The greater volume of exports is also driven by the ongoing trend of increasing carbon (EU ETS) prices. In the first six months of 2021, the carbon price increased from €32.73/tce on the first day of 2021 to €56.54/tce on the last day of June. With higher carbon prices, neighbouring countries are likely to import more energy from France due to its low-carbon energy generation. In the following months, it’s likely that nuclear generation levels in France will remain at the level they are at now due to the higher carbon prices, so power export volumes will remain high.

Sweden became the second largest net exporter with 11.4TWh, with Norway in third place with 6.6TWh. Electricity in Sweden is primarily produced with hydro energy and is supported by three nuclear plants and increasing wind generation, which hit a new all-time peak in March 2021. This fuel mix based on renewables and nuclear generation allowed Sweden to increase its energy exports to neighbouring countries.

When net exports as a percentage of demand was taken into consideration, France only exported 8.7% of its energy demand. In comparison, Bosnia ranked first with a net export of 63.8% followed by Sweden (15.7%) and Bulgaria (14.7%).

Italy remained the biggest net importer with 19.8TWh, sourcing 9TWh from Switzerland and 7.3TWh from France.

Britain remained Europe’s second biggest net importer, recording net imports of 12.3TWh in the first half of 2021. It’s likely that Britain’s energy imports will increase further due to the North Sea Link that connects Britain and Norway, which is scheduled to go live on October 1. After the commercial go-live date, it’s expected that Norway will export its low-priced hydro energy into Britain almost all of the time. Only on rare occasions will the interconnector flows reverse; they will be traded via an implicit auction on a day-ahead market. For instance, at the end of March 2021 the day-ahead prices in GB were lower than in Norway – this indicates that energy would have been exported from GB to Norway. In the long run, Britain will stop being a net importer of electricity as more and more offshore wind is built around its shores. In its recently published future energy scenarios document, National Grid forecasts that this reversal will occur quite soon by the middle of the 2020s. 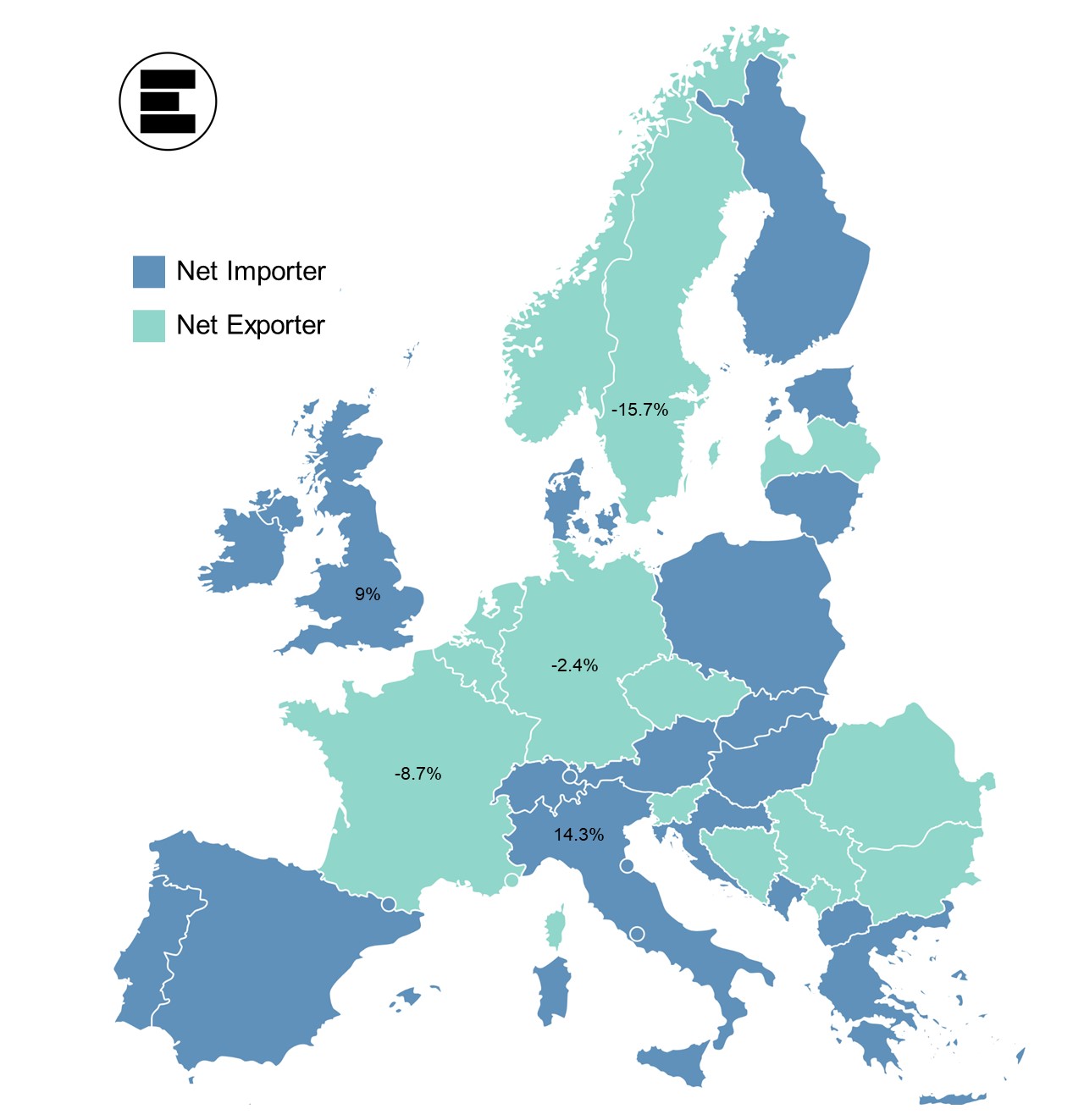 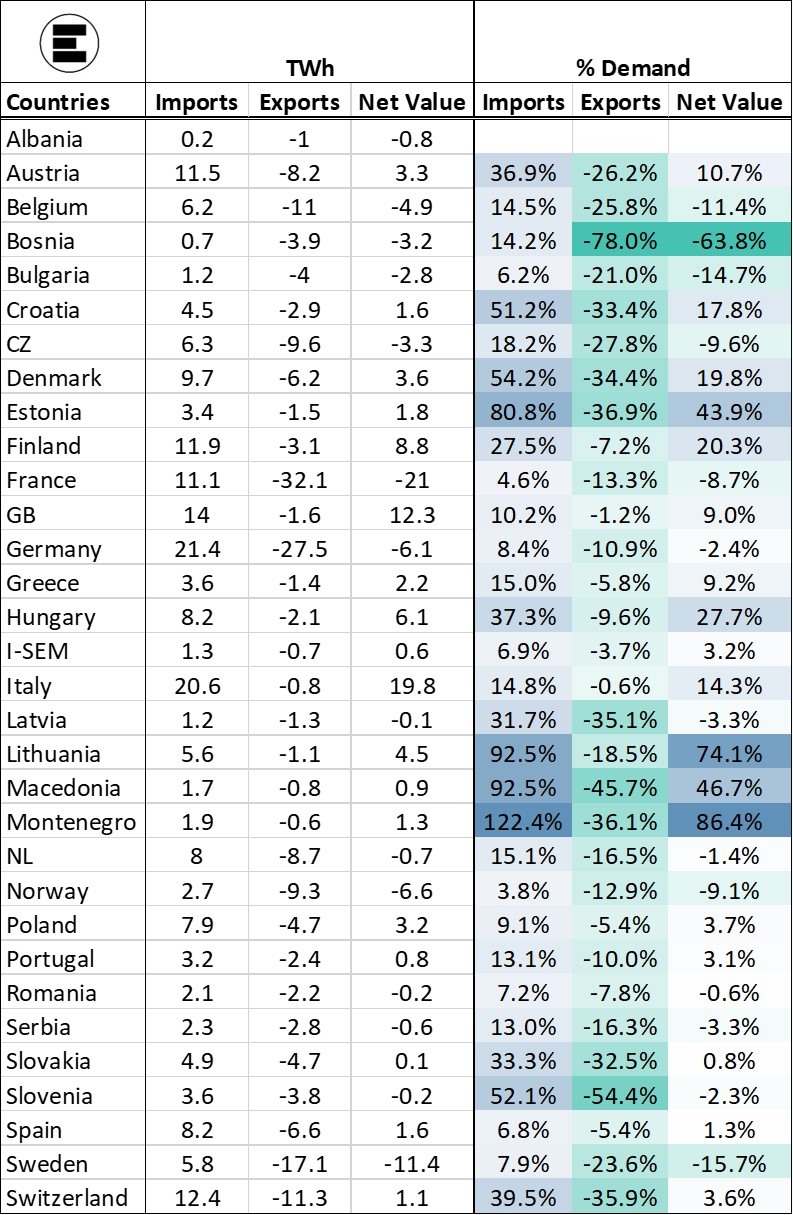 Norway overtook France to become the biggest net exporter of power in Europe in the second half of 2020.

The value of imports and exports in Europe during the last six months of 2020 were looked at. Norway’s total net exports amounted to 14TWh, with most of the power flowing to Sweden (7.2 TWh) and Denmark (4.9 TWh).

Norwegian water reserves increased steadily during the second half of 2020, due mainly to a combination of wet weather and low demand, and reached a new peak for the first time since 2015. Norwegian power prices remained low, which made it an attractive economic proposition for other countries to meet their electricity demand by taking some of the excess water from Norway. As a result, Norway doubled its net exports to neighbouring countries compared to the first half of 2020.

Norway’s position as the biggest net energy exporter could remain for some time, especially with neighbouring countries such as Denmark relying on Norway for supplies. In addition, Norway recently launched a new interconnector into Germany, increasing its potential export capacity by 1.4 GW.

During the winter, nuclear generation in France saw limited availability due to delayed power plant maintenance caused by COVID-19. This had a considerable impact on France’s energy trading pattern, as nuclear generation is the largest contributor to the country’s fuel mix. As a result, France often relied on energy imports from its neighbouring countries – mainly from Spain with a total of 4.5 TWh of energy imports. When France was exporting to Spain, RTE often used countertrading to partly reverse the flow. This also happened on several occasions on the IFA interconnector to Great Britain, where BALIT (cross-border balancing arrangements) was used to maintain the balance on the grid.

Although Germany has exported more than France, it has also imported more energy. Due to the amount of power flowing through Germany, it can be seen as a key energy transport hub with power flowing from the north west to the south east of Europe. After German coal generation collapsed in the first half of 2020 due to reduced demand and high renewable output, coal made a comeback during the cold winter on the back of a sharp gas price rise and increasing demand (still lower than previous years) and is now back to pre-COVID levels of utilization.

Considering net exports as a percentage of demand, France only exported about 5.3% of its energy demand. In comparison, Bosnia ranked first with a net export of 34.4% of its demand, followed by Slovenia (26.6%) and Norway (21.9%). Like Norway, Slovenia also relies on hydro power but also includes lignite in its fuel mix.

Italy remained the biggest net importer of electricity during the last six months of 2020, sourcing 17.6TWh from outside of the country. As Italy could not rely on a large volume of imports from France, it instead sourced more energy from Switzerland (9.6 TWh), which also has significant nuclear capacity. Britain was still Europe’s second biggest net importer, recording net imports of 8.1TWh in the second half of 2020. 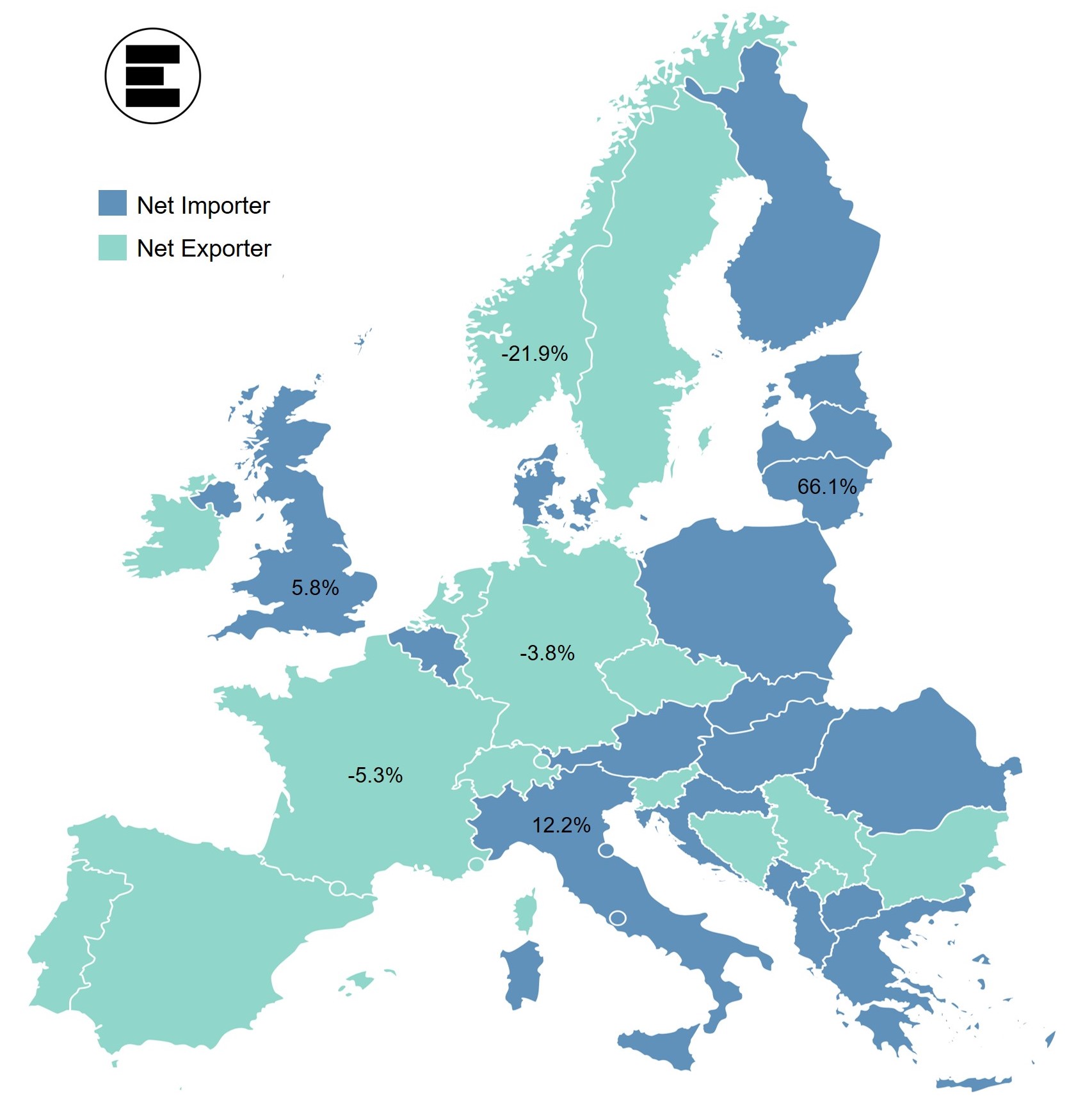 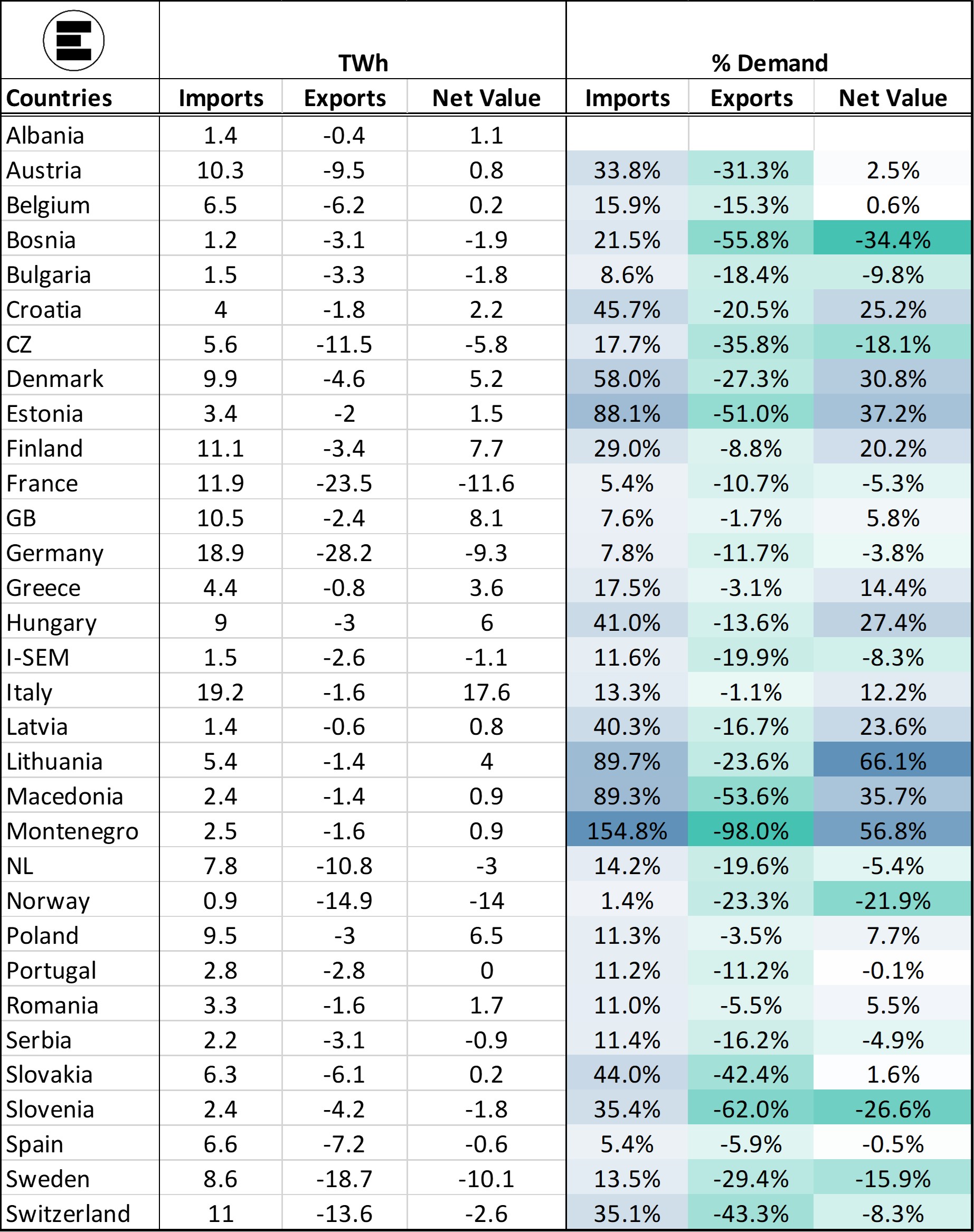