Negative power prices have swept across Europe in the first nine months of 2020, with excess power in the market resulting in consumers being paid rather than charged to use electricity.

In the nine months to September 2020, European countries on average saw negative day ahead prices almost 1% of the time (0.8% on average). These levels were typically 3-4 times higher than those seen between 2015 and 2018, and more than twice those in 2019.

During these periods, the markets could not use as much power as they generated.  With supply required to match demand, the day ahead price of power in markets increasingly fell below zero – meaning that generators were charged for the privilege of producing power and electricity consumers were paid to use power.

In such an event, generators will stop producing power if production costs get too high, making it unprofitable in the long run – as a result, the energy supply is reduced. Consumers are being paid in order to increase the energy demand.

However, the price we pay as consumers at home is not the same as the price the market pays. Instead, a fixed value that smooths out the extreme prices is more typically used. If the frequency of these events increases, it may become the norm to move away from the fixed value in the future and instead use more power when the market is oversupplied and less when power is at a premium. Despite this, it is worth bearing in mind that 2020 has been a unique year. The combination of increasing interconnection between the participating markets, a higher share of renewable output, and lower demand due to COVID-19 in the first half of 2020 made the market much more volatile. 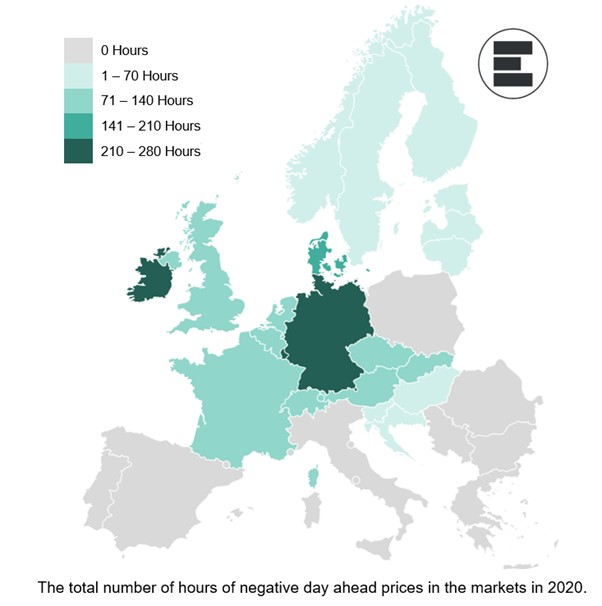 Markets with high wind generation have been affected

Markets with high wind generation such as Ireland, Germany and Denmark have in particular been affected by negative pricing as peak levels of wind output have started to outpace the COVID-19 -influenced levels of demand for power consumption.

The amount of overall energy demand covered by wind generation reached 49% in Denmark, 36% in Ireland and 27% in Germany – the highest three rankings in Europe. As an example, Ireland saw negative prices 4.2% of the time (well above the norm for Europe).

Belgium has also seen particularly low prices as the combination of high nuclear and solar generation have at times oversupplied the market during periods of low demand, with prices dropping to -€115.31 Euro/MWh on the April 13. 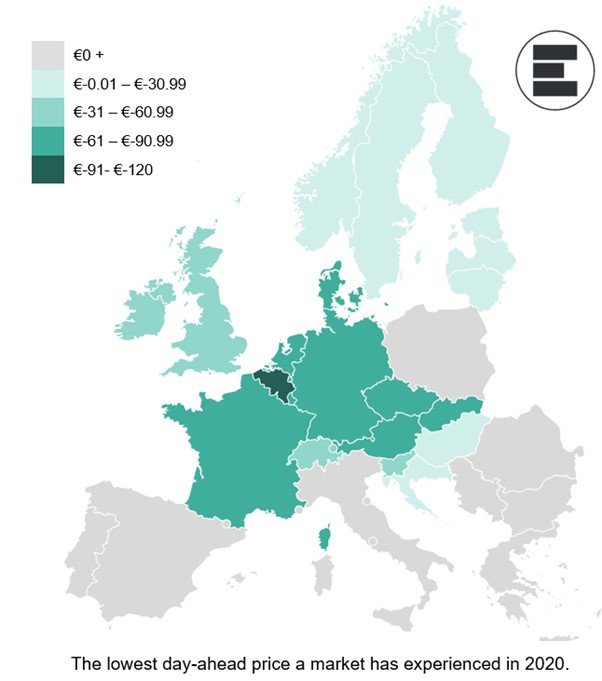 These challenges have so far been made more pronounced in 2020 as renewable generation levels continued to climb and demand for electricity declined across Europe as lifestyles changed in response to the COVID pandemic. Electricity storage can act to reduce these impacts – at least as far as it is economically sensible to do so – and new technologies which can provide services without producing active power can help to reduce the generation required from conventional power sources. An example can be found in Britain as synchronous condensers are being introduced.

In Britain, these synchronous condensers provide inertia to the market. Inertia is in essence a natural resistance to any changes in the electrical frequency of the market. This resistance means that frequency drops at a slower rate when a loss of supply occurs, as it is necessary to keep frequency within a certain range.

A market where frequency drops below this range very quickly is much harder to manage. In 2020 there were many occurrences of negative pricing where large power stations were still generating huge volumes of power to provide, not power, but “services” such as inertia.

Replacing these power stations with an alternative such as a synchronous condenser – a motor that effectively still spins and provides inertia but without being attached to a generator – means that these plants can be switched off and more renewables can be accommodated in the market. This in turn acts to reduce instances of negative pricing.

Countries that have not experienced any negative pricing since 2015 are Bulgaria, Greece, Italy, Poland, Portugal, Romania and Spain. The reasons for this activity vary from country to country.

Countries in which renewable generation makes up only a small part of the overall power mix – such as Poland, for example – results in a less volatile market.  Another example is Portugal, which is connected only to Spain, with negative prices not possible under the market rules of both countries.

In the future, capacity at renewable projects is set to grow and the reduction of demand in 2020 gives an insight into the impact of what increased renewable capacity might look like.

As noted, storage can reduce these impacts, as can increased flexibility in the markets, but this activity so far in 2020 does highlight some of the areas in which markets may benefit from improvements going forwards, albeit with many of those improvements already starting to be introduced.