Following a declining presence of the GB nuclear fleet and an increased growth of renewable generation against the background of the energy crisis, this year’s T-4 Capacity Market Auction for delivery year 2024-25 has cleared at an all-time high price of £30.59/kW/year following the previous record in the T-1 auction of £75/kW, with the biggest story being the many batteries that secured long term contracts for their capacity at this record price.

The Capacity Market is a mechanism introduced by the Government to ensure that electricity supply continues to meet demand as more volatile and unpredictable renewable generation plants come on stream. In the T-4 auction, potential Capacity Market participants can bid for contracts in auctions held four years ahead of the delivery date.

During the delivery year, capacity providers will receive monthly payments for their agreed obligation at the auction clearing price. Providers are expected to be available to respond with their agreed generation volumes or load reductions when called on by National Grid at times of system stress.

The auctions follow a descending clock format, starting with offers of £75/kW/year and gradually reducing until the minimum price is reached at which the supply of capacity offered by bidders is equal to the volume required. 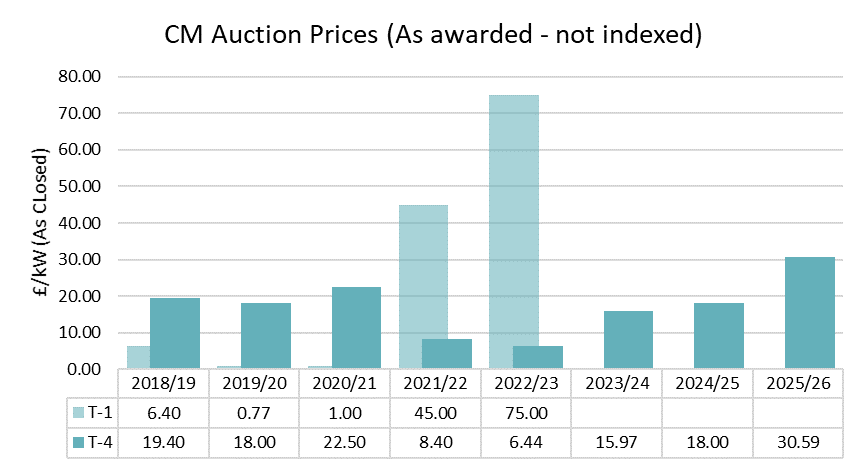 The T-4 Capacity Market Auction for delivery year 2025/26 took place on 22nd February 2022 and concluded at 16:00 after nine rounds of bidding. A total of 48.6GW derated capacity prequalified for the auction against a target capacity of 42.1GW.

The clearing price was the highest clearing price of any T-4 auction in history. The reason for this high price is due to the lack of prequalifying capacity. The amount of prequalified capacity for this T-4 auction was a record low, in part due to the expected closure of much of the existing nuclear fleet. Only ~1GW of derated nuclear capacity prequalified this year, less than a third of last year’s total. This absence reduced supply which helped drive up the clearing price.

Only two nuclear units, Sizewell B1 and B2, won a contract this year – with this being a much younger plant than the rest of the nuclear fleet. This is in line with the reductions in nuclear contracts seen over the last few years. In the T-4 auction for delivery year 2023-24, eight units won contracts which was then halved to four units the following year. This year it has halved again, demonstrating the scale of the exit of older nuclear plants from the market in coming years.

Around 2GW of new build generating CMUs won a contract this year. Among the new build units were, Immingham OCGT B and Kemsley Paper Mill CHP.

Batteries saw a major increase in contracted capacity this year with ~1.1GW of capacity winning contracts split between 107 units, the vast majority of which were new build units. This is a substantial increase on last year in which ~250MW of capacity won contracts for 32 units. When derating is considered, the total battery capacity brought forward in this market is around 3GW bringing the GB total battery capacity to around 5.7GW.

Around three quarters of the batteries that won agreements had their capacity contracted for fifteen years – highly significant for them given the high clearing price.

The break down on a full capacity basis (i.e. not derated basis) is shown in the chart below. The technology classifications are form EnAppSys and allow greater granularity of the results. The EMR delivery body reports capacity on a derated basis, for some asset classes this can hide the underlying trends. 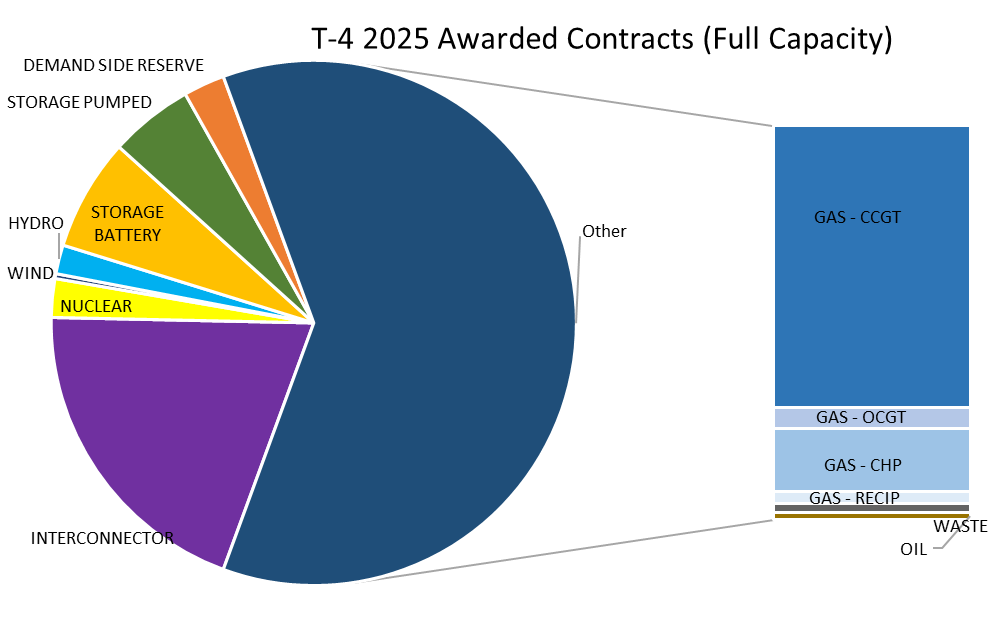 EnAppSys director Paul Verrill said “Battery project winners are the biggest news in this auction with many new build battery projects having chosen the year with the highest ever clearing price for a T-4 auction to come online. This is a major boost in particular for those units that were able to secure long-term contracts.”

“The standout headline for batteries is the Intergen Gateway project at 320MW winning a contract. With Zenobe, Sembcorp and Statera also bringing forward 100MW capacity projects”

“Again the auction has seen large new build CCGT projects fail to make traction arguably due to interconnectors taking contracts that are already coming on line or are operational. They now account for 16% of the capacity”

“95% of the capacity is from existing assets, and gas fired generation and interconnectors account for more than 80%”

See chart below of results and notes