Low availability of French nuclear power stations due to problems with the fleet and high commodity prices arising generally from the war in Ukraine and specifically from gas supply disruptions arising from this, have changed the balance between export and import of power from the continent to the GB market. All of this is against a background in the GB market of the phase-out of fossil fuels is reducing the capacity from older large generating plants and a reliance on interconnectors to replace this capacity is likely to result in a very stressed electricity system this winter in GB.

There have been measures to reduce the impact of events both in GB and continental Europe. These have centred on removing limitations on coal generation and increasing power station capacity either via capacity market contracts, to pay for power station ‘availability’ or achieving the same through direct arrangements.

EnAppSys does not foresee the lights going out this winter as there should be mechanisms in place to correct activity for these most extreme events, unless a major event follows such as gas curtailments across Europe due to loss of supply. Power markets will make the headlines in GB, Ireland and France this winter, with power flows between these countries key to keeping the lights on. Lower imports of power than expected will lead to higher costs and hence higher prices for billpayers.

To see GB and the continent through winter will require a heavy reliance on gas generation. If gas supplies are interrupted then some intervention is likely to be required to prevent unplanned power shortages.

The GB electricity market does not have sufficient capacity this winter to avoid some significant high price events in the market. We anticipate there being some capacity mechanism warnings issued and extreme price events similar to the ones we have seen in the GB market this week and over winter last year. We believe there is sufficient margin on the system to mean there is a low risk of blackouts but insufficient margin to mean that spot prices remain at reasonable levels. Wholesale price records are likely to be broken this winter in GB and balancing costs will be significantly higher, very likely to be in excess of last winter.

The condition of the French nuclear fleet means that French power is trading at an extreme premium to GB power. We can expect to be exporting to France; with 3GW of capacity currently available and another 1GW of power returning in mid-December, GB could be exporting up to 4GW to France. On the other hand, the price differentials between GB and the Netherlands, Belgium and Norway imply that GB will be importing power from these countries during the winter. So, generally, the net interconnector position in GB will be close to net zero but this is different to previous years when GB has traditionally relied on between 2 and 3GW of power from the continent to help balance supply and demand. 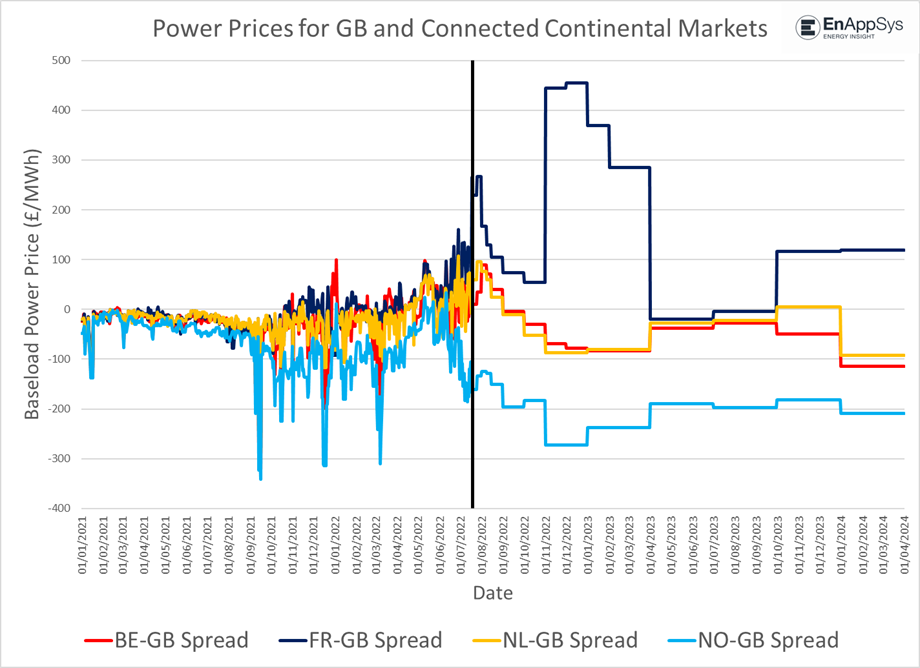 The chart above shows the spreads in price between different markets. Underlying data is from the European Energy Exchange (EEX) forward markets. The data before the black line is historic; after it is futures contracts. You can see that the price differential suggests that GB will continue to export to France until the end of March 2023 but import from Norway, Belgium and the Netherlands from October onwards.

Notice the extreme spread in price between GB and France. Currently the situation in France with peak prices being in excess of €1,500/MWh implies that France is in extreme trouble this winter and will need help from the GB market. 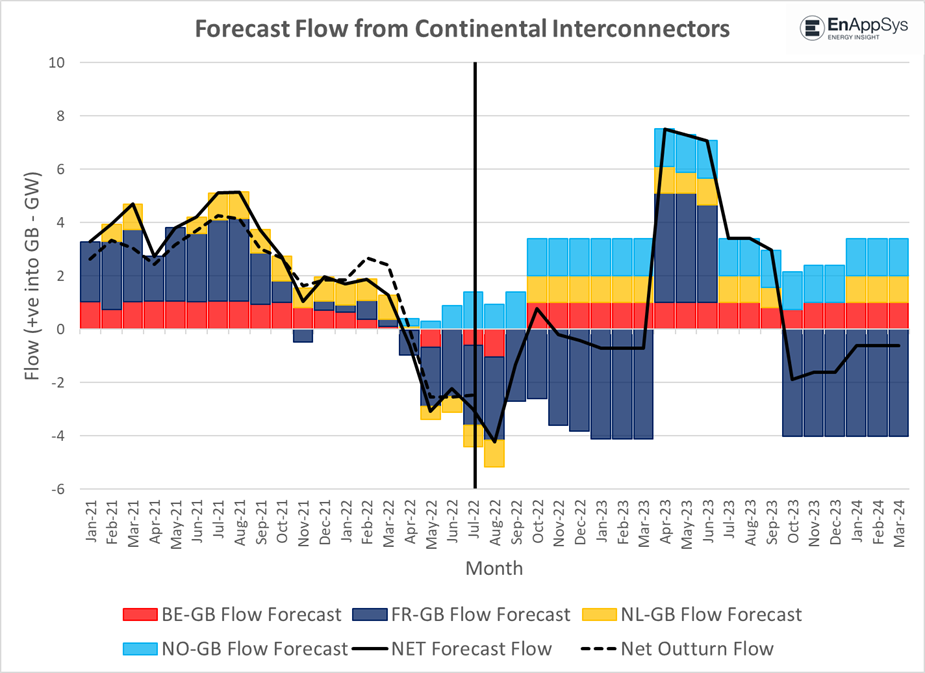 The interconnector forecast chart shows the average forecast flows between markets based on price and declared available capacity. The net forecast line (the solid black line) shows that the current situation with exports from GB will continue until October when the exports balance out between Norway, Belgium and the Netherlands on one side and France on the other. With only 3GW of capacity between GB and France in October, this means that we move to slight net import before the IFA interconnector returns to full capacity and France can import up to 4GW of electricity. The prices flip in April 2023 for the summer (French and GB prices are very close in Q3 2023 so net zero French flow) so this means that we then get the benefit of import from the continent before we return to a similar situation for the winter of 2023/24 as we will have for winter 2022/23.

First some background. Electricity demand in GB is met from a generation stack with many different components and fuel types. This stack contains nuclear, biomass, wind, solar etc. We can use the declared availability data from NG ESO to determine the availability stack and use the demand forecasts provided by National Grid to determine the likely demand for electricity. By arranging the generation stack in price order and applying different demand scenarios, we can see which power stations are setting the price and therefore come up with a view on the likely pricing scenarios. In every scenario we will use peak demand (between 5 and 6PM). During this period of peak demand, we can see that in winter solar power will be negligible because the sun is below the horizon.

The first chart below is the average condition pricing scenario. There are two demand lines (the black lines). The lower line shows the demand with no export to France; the higher line shows full export to France so demand on the network will be between these two lines. In these cases, it shows that generally the demand for electricity with or without exports to France has demand remaining inside the gas-fired generation zone and therefore there is no risk of super-high prices. 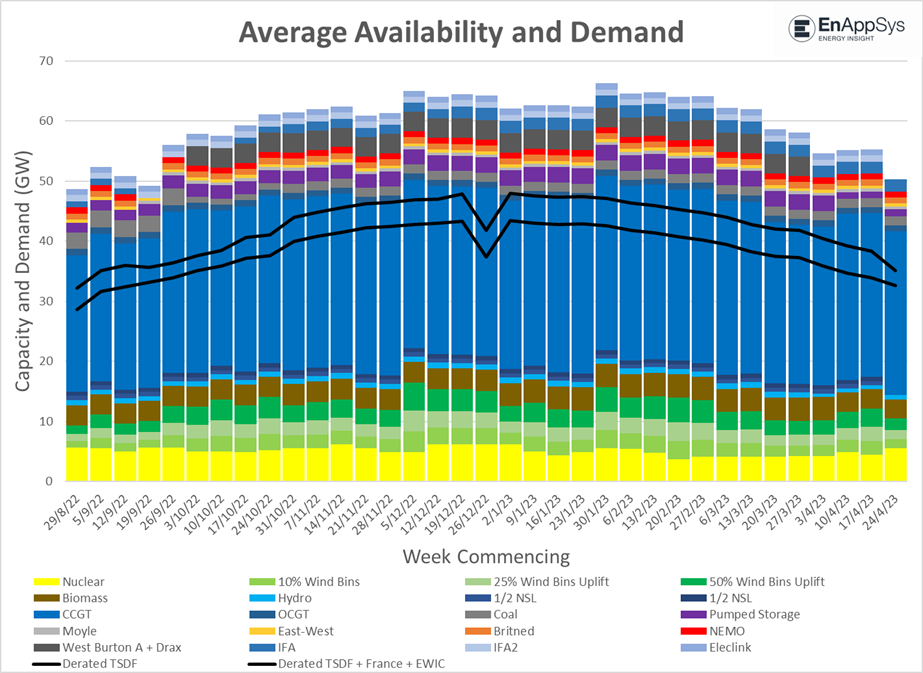 The second scenario below shows the 10% minimum wind case. This is wind output for 10% of days in winter when wind is at its lowest level. In this case, we have the following assumptions: demand is slightly higher reaching the NG ESO forecast level, Ireland will also be having low wind so will require 500MW of power from GB, and NSL has a reduction in export capacity to GB of 50% (its running pattern last winter). In this scenario we are assuming no intra-day power station failures. Again, we have the two demand lines showing no export to France and 100% export to France. In this case, with no export to France from the end of November to the end of January, we are in a very high-priced zone because we are reliant on pumped storage for meeting demand. In the case of 100% export to France, we have occasions when we are in the emergency coal reserve plant zone, which translates to extreme pricing in the GB market. Also, in this scenario between the beginning of November and the end of March, GB is dependent on interconnector flows from NL and BE which puts the GB market at risk of very high prices as interconnector capacity prices will be bid to very high levels as they will be the marginal source of power. 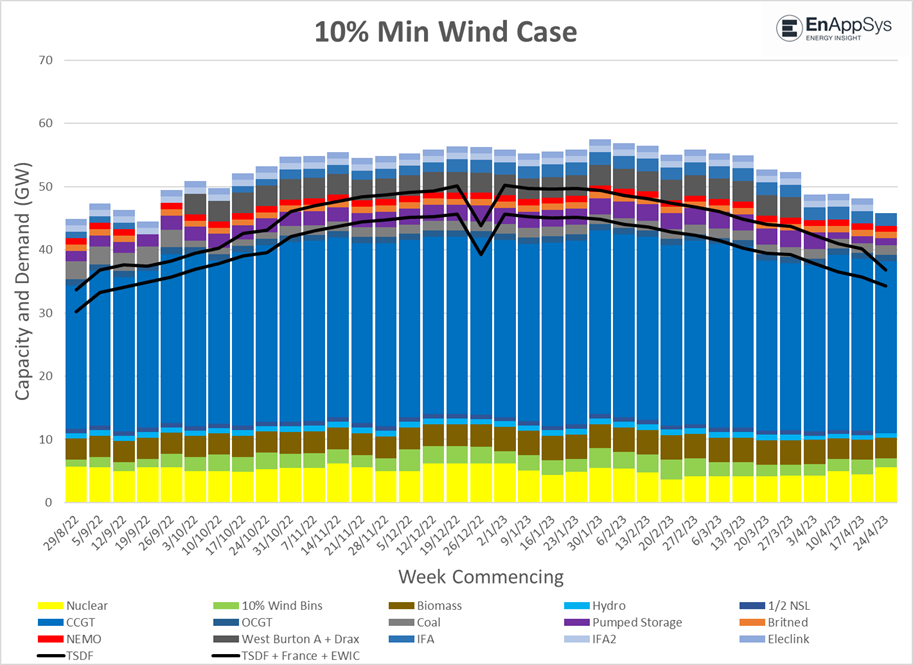 The emergency coal units are West Burton A and Drax unit 5 and 6, which have won special reserve contracts from the government to stick around this winter (they were scheduled to close). It is likely that they will charge significant amounts of money and the treatment under market rules may result in high penalty prices for using these power stations, which will feed through to wholesale market prices. The continuing lack of detail on these arrangements is causing uncertainty in the market.

The capacity mechanism has purchased a lot of capacity on the interconnectors on the assumption that they will be available to provide greater than 5 GW of imports into GB during a capacity crunch. This situation has changed for this winter, requiring the purchase of additional capacity from coal-fired power stations outside of the capacity mechanism. The capacity mechanism is supposed to ensure that interconnectors flow in during any extreme periods, but outside these events, flows will follow market dynamics and loss of interconnector imports will tighten supply below the levels otherwise expected for the winter period. Without these inflows, bill payers will have to find more money to support the system when prices for energy are already unaffordable for many.

We asserted at the start of this piece that we do not believe there is a risk to security of supply because we have made the assumption that gas supplies continue uninterrupted. If gas supplies are curtailed because of a shortage of gas on the continent, then as you can see from the capacity charts, we are heavily reliant on gas for generation so there is a risk of blackouts from a shortage of gas. Even if GB closes the gas interconnectors to the continent to maintain security of gas supply in the GB island market the shortages of gas on the continent will drive power prices very high closing the electricity interconnectors to providing power to GB.

There is also a risk to security of supply if prices on the continent become significantly higher and interconnection does not respond to the capacity mechanism requests as planned, maybe as a result of super-high gas prices hitting power plants or security of supply issues in France. We may see prices like we saw in the heat-wave week on the interconnectors trades, leading to high balancing costs and impacts on consumer bills.

This winter will see some extreme pricing events related to French nuclear power problems, the war in Ukraine and the reliance in GB on interconnectors to provide power in a capacity crunch. The winter will require co-operation between gas and electricity system operators across interconnectors to keep costs low for consumers and the system secure.

Whilst GB is physically an island its extensive interconnection to the continent and reliance on electricity imports in a capacity crunch mean that any issues with gas supply on the continent will affect the energy market in GB. Government and regulators need to recognise this.

This winter will be a perfect storm showing the effects of reliance on a single technology type for electricity in France, a reliance on Russian gas as a primary energy source in Europe and a reliance on interconnection in the GB electricity market as a replacement for generation capacity.